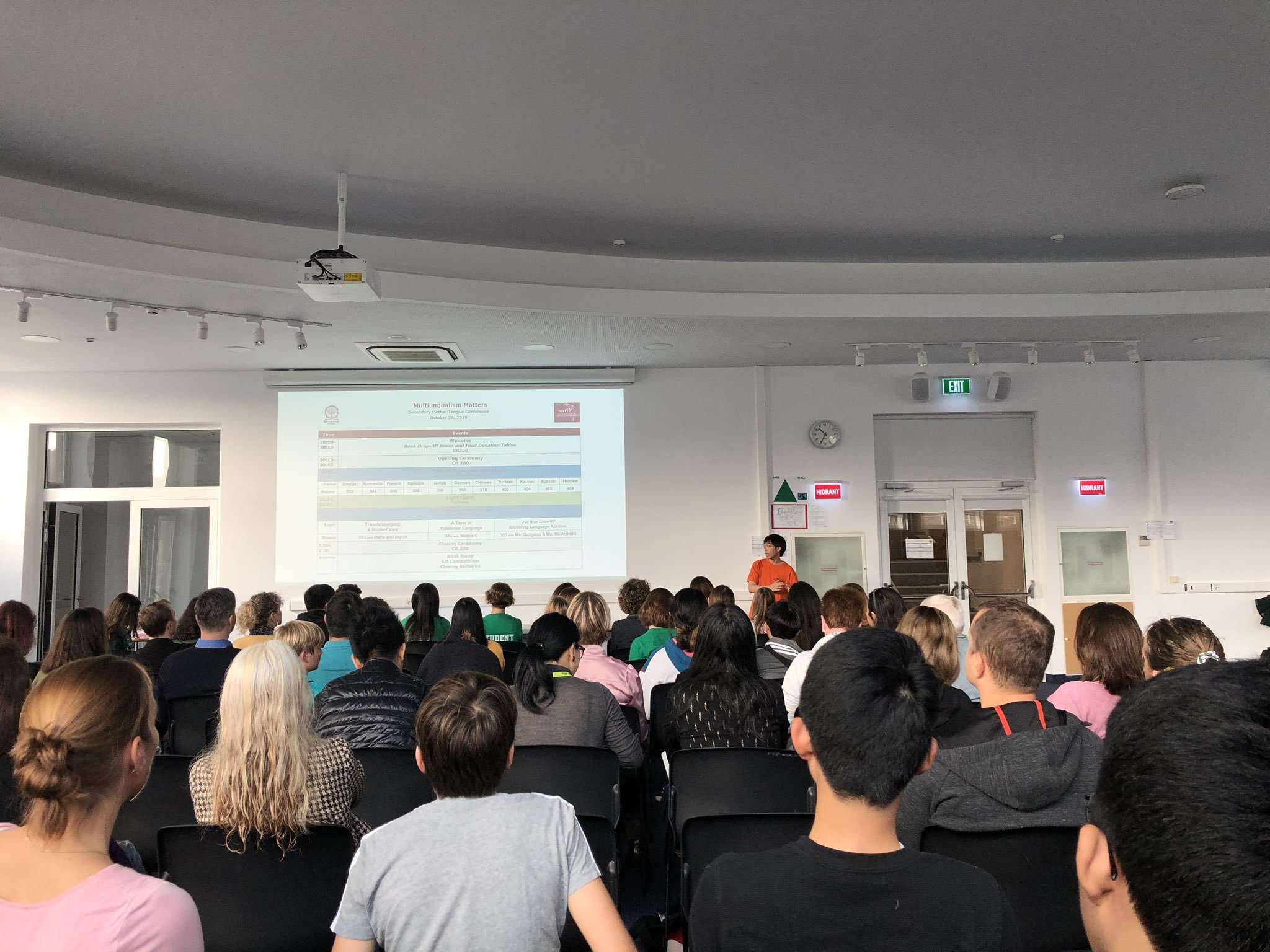 The conference was something the Mother Tongue council members have been preparing for over two years, and they were thrilled that more than 60 people came to participate on a Saturday.

“I think it was really successful, ” says Council Advisor Kate Sorrell. “For the first time that the school community had ever organized something like this, we had a very organized program; we reached out to so many communities and had lots of people come and participate. Considering this was mainly student-led and we had a team of everyone coming together, it was really impressive.”

For the opening ceremony, student leader Seongjin K. provided a presentation on the content of the multilingualism conference, followed by AISB Director Peter Welch‘s insightful speech about his views on multilingualism and how it connects to AISB. He provided interesting facts for each language and explored the theme of diversity. Additionally, he mentioned how invaluable it is to have a mother tongue, as it is a personal connection to culture and personal identity.

Welch compared being multilingual as “a person with two souls,” subsequently explaining how being exposed to various languages can impact you as an individual.

Immersing into the language

Next off, all participants went to their assigned language workshops. The language immersion program was made specifically to “connect those speaking your mother tongue,” and to discuss topics your community is passionate about.

As an example, the Russian workshop talked about how is it to live through the eyes of a multilingual, and what are its pros and cons. These one-hour sessions created an opportunity to share ideas and thoughts on the topic chosen, and to simply communicate in one’s own language.

Later, there was a small lunch provided by the community in CR 300. It included an assortment of traditional dishes and snacks, which was a wonderful idea for others to learn about different cultures. Also, to simply relax and take a break before the next activities.

The multilingualism workshops were the last events on the schedule. Led by both students and teachers, each of the workshops talked about major ideas related to multilingualism. For instance, the Romanian culture workshop focused on key points of the language, the must-knows, and important information a person new to the country would need to know. Whereas the “translanguaging workshop” explained and discussed how is it to learn and adapt to an “English” environment (especially in schools) and how it affects your mother tongue and your personal identity.

Sorrell says that the goal of the event was to “raise the profile of our multilingual community,” to make a connection with languages, and also to start conversations about multilingualism and language learning.

“You can’t exactly measure the impact,” says Sorrell, “but since the conference, I’ve already been having some parents get in touch with me, some students ask about possibilities of doing their mother tongue, and people telling me that they’ve started to realize how important it is to know your mother tongue. I believe all that was the hard work we’ve put into the conference; so once again, I’m very happy it happened.”

A student perspective: thoughts from the student leader

We sat down for a small interview with the student facilitator of the Multilingualism Council, as well as the leader of the conference, Seongjin K from grade 12. A special thanks to him for doing an amazing job leading the event!

Q: What do you think made the conference successful?

A: “Unexpectedly, a lot of people came to the conference, which I was honestly surprised about because I didn’t expect so many people to be interested in this type of event. Also, the organization went really well. Everyone turned in their work on time, took responsibility, gave their dedication and energy, therefore making everything go successful.”

Q: Why do you think AISB should maintain the importance of mother tongue and multilingualism?

A: “As stated in the opening ceremony, since AISB is such a diverse community– we have people from over 50 nationalities– so obviously not everyone speaks the same mother tongue and comes from the same cultural background. It is my personal belief, that to bring a community together, that we should be able to communicate with one another. In terms of multilingualism, even if we speak English, what you’ve learned before you arrived at this school is probably mostly in your mother tongue, so it forms the basis of your identity and your identity is what makes you who you are. So I think that’s why we should all cherish our mother tongues.”

Q: Do you think you’ve learned something new? If yes, what is it?

A: “I definitely learned about translanguaging, which I had no idea what it was before. I think the multilingualism workshops helped a lot to learn something new. Also, it is just about working together with other people to make something big, especially for this conference. Even if I organized something before, it wasn’t at this level.”

Q: How was it to work as a team leader? Time taken to plan out, things to keep in mind, organization?

A: “For instance, planning the multilingualism council meetings, it doesn’t take me that long, probably around 15-20 minutes. Then for events such as this one, I had to keep deadlines in mind, remember what job everyone had, think what is supposed to happen next, and etc. It definitely took much time, but everything went alright and it was a great experience for me.”

Q: Korean Workshop: what was your topic/theme and why did you choose it?

A: “In the Korean workshop, we talked about academics and how to be more successful in MYP and DP. It was about the skills that you need, what you have to know and how the system works. This theme was chosen as it is something very important to every student in our school and will hopefully help them. We also discussed the possibility of having Korean mother tongue lessons here in AISB for those who want to try out.”

A: “I think it would be a great idea to put lunch after the meeting so that some people wouldn’t leave too early and stay for the multilingualism workshops. As well as the promotions could have been started much earlier to spread awareness, also put up more posters for everyone to see.”

Q: What kind of benefits and advantages does being multilingual and knowing more than one language bring to you?

A: While knowing one language very well is a virtue, being multilingual provides a good opportunity for you to reach out to wider communities because you have access to more information in other languages. Consequently, it also helps to widen your horizon, enabling you to basically see more, hear more, and experience more.”

A: “I would have to say when using informal speech, Korean is the easiest because I grew up speaking it. As for academics, I’d say English as it is the language in which I studied for all those years. I also notice that now in my French class, I’m starting to think in French as well.”

Thanks to everyone who participated, organized, or led something at the Mother Tongue Conference. We appreciate all the interviews and the amazing workshops, and look forward to attending another conference in the near future!