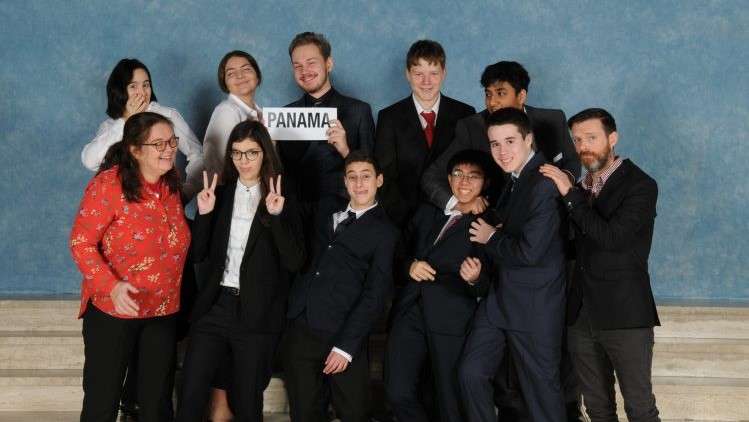 In today’s tense world of politics, many people from around the world are ready to put a spotlight on what they believe. With even more ways to communicate with each other, everyone is able to have a political conversation–whether it’s a yelling contest at a cafe or a full-on Twitter war.

If you’re one of those people yelling and tweeting, Model United Nations (or MUN for short) is the perfect way for you to express your opinions in a civilized manner. Here’s a look at what happened on our latest trip.

Getting to The Hague

On the first day, we had to be at school by 6:00 AM. You’d probably think that we were all tired but we were surprisingly all very energetic to be awake that early in the morning. We arrived at the airport at roughly 6:30 in the morning. Luckily, none of the foreign students had any trouble getting through border control. Once we arrived at the waiting area, everyone went their own path. Some people went to Burger King, others just walked around talking about who-knows-what and others went to the usual mainstream cafes.

Boarding was at 8:00 and none of us really enjoyed the flight both to and from the Netherlands. Tarom is not a personal favourite airline of any of the grade 10s. The worst part was waiting to get to the destination. There was nothing to do 35,000 feet in the air, but listen to music, watch a movie, read a book, and look out of the window. Or, you could work on your resolutions: a resolution is a paper you write that has a number of well-structured sentences that suggest solutions to isolated problems that relate to the main issue.  It sounds like plenty to do, but humans (especially teenagers) have a surprisingly short attention span. As a result, it was pretty boring.

When we finally landed at Amsterdam Airport Schiphol, we took a half-hour bus ride to The Hague. We stayed at the Holiday Inn in one of the most beautiful parts of the city. We then all got french fries and walked around the square. After that, we went to the train station and all got a ticket to Amsterdam Central Station. The 30-minute journey was very quiet and full of laughter (at least, for the 10th graders).

We all went around the main square in Amsterdam and went into one of the prettiest and quietest parts. We went there because we came a day early before the conference, and wanted to spend a day visiting around.

At 6 pm, we were all split up into groups of three or more and were sent off to find our own dinner. After everyone had finished their meals, some had a bit of extra time to go get a coffee. It was 8 in the evening and everyone was ready to go back to the hotel. That night, all the delegates (students) stayed in their rooms and had a good night rest for the next four busy days.

For the next four days, it was the same exact routine: Wake up, get breakfast, be in the lobby by 8:00, find your committee and do a good job. At the end of every day we would all gather in Mrs Hofman’s room and talk about our day; what went well, what we didn’t like, what ludicrous thing happened in our committee this time, etc.

Mrs Hofman, the director of the trip, said in an interview that these small moments were her favourite part of the trip:

When we all got to the venue on the first day, we got separated into our own committees, which are different groups we divide into for MUN, like the Sustainable Development Committee. Because we were all split up independently, I will talk about my committee.

The first day was lobbying; the least interesting day of the trip, in my opinion. Lobbying is when all the delegates (students) split up and talk about their individual resolutions. But at the end of the day, there was an opening ceremony that lasted about an hour. There were very good speakers and even the Dutch king came to celebrate fifty years of THIMUN.

Day two and three were the most fun and funniest of the four days. The second day, we started debating and at first, everyone was kind of slow and tired because they had woken up so early. But once we got deeper into the nitty-gritty, the debate became more intellectual. For example, the delegate of Germany was my personal favourite. He would insult and belittle every resolution that wasn’t his, and use the least formal language possible, like, “What is this crap?!” or “This resolution is way too long, and that’s not what she said by the way.”

I had made a few jokes myself. For example, on the third day of debating, a question was raised about how many birds died each year. The chairs, or board of judges, gave the number and followed it up with, “But that really does not matter at the moment.” I stood up and asked. “Are you saying that human lives are more important than bird lives?” The whole room started laughing. Another memorable moment was when Germany compared a resolution to a bikini because it had so many holes in it.

On the fourth day, the last day of THIMUN, everyone who was part of it would go out, party, have dinner, what-have-you. There is even an annual last day of THIMUN party which most students like to attend every year.

On the last day of our trip, Mrs Hofman took us to Leiden, a beautiful old university city. We spent the whole afternoon there and then took the train back to The Hague. We got our luggage ready and off we went back to Amsterdam Airport. After we got through border control, we hung out around the airport from 6 pm to 7:45. We boarded the same Tarom flight back to Bucharest and arrived at half-past 10 in the evening. Almost everyone went to sleep on the flight back.

And that concluded our THIMUN trip. If you’re interested in joining us next year on this fruitful adventure, MUN meetings are usually every Tuesday and Thursday. If you would like more details, you can contact Mrs Hofman via her email.

Anime in Romania: Why is Anime-con cancelled?

The CEESA Robotics Competition: Why AISB Isn't Heading to Detroit

Get out of Town: Our Top 3 Destinations for the Upcoming Break

I Tried Sleeping for 4 Hours a Day. Here’s What Happened