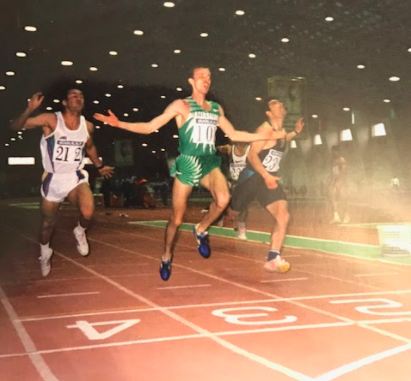 “On your mark, get set, go!” Tracksuit crinkling, feet slapping, Coach Arif Akhundov tears down the track in record time. Head held high, back straight, he effortlessly runs past the finish line and back to the start to reunite with his students. Their eyes fixate on him, awed by his technique and inspired by the agility and grace of his long, efficient strides.

It’s obvious that Akhundov isn’t any ordinary coach. Before coming to AISB, he competed in the men’s 100m race at the 1996 Summer Olympics, representing his country, Azerbaijan. And while his 11.11 recorded time wasn’t enough for him to qualify for the next round, he says that “qualifying [for the] Olympics was [his] biggest sporting achievement in [his] career.”

“I was nervous and could not perform at my best,” he recalls. “Also, my body did not adapt well to the different climate and time by the day of competition.” But Akhundov says he doesn’t want to make excuses. “I just did not perform well, and I’m sad about missing the opportunity.”

This experience has undoubtedly shaped Akhundov as an educator, and one of the most important lessons he teaches his athletes is “not only how to win, but also how to lose.”

Coach Arif’s interest in running began in Grade 5. And two years later, with the full support of his parents, he was accepted into a special sports school. Here, was able to focus on making his talent less like a passion and more like his life. When he transferred to the school, he says he fought to find balance between academics, family life and running, but soon realized that “when you are so passionate about something, you have to make sacrifices.”

During his time at this school, he formed a strong bond with his coach, crediting him as “one of [his] biggest inspirations.” Akhundov remembers that “instead of him telling me what to do, we would work together.” Coach Arif says that much of his success was because of this coach—because he believed in him.

Personal discipline was also a building block leading to his success. “I always had a goal,” he says. “I would make myself a goal for each season or competition and when [that] was over, I would make a new goal.” By reaching one milestone at a time, Akhundov was eventually able to reach his dream.

Coach Arif remembers it clearly. Standing on the Olympic start line before the race, every body watching. He says during the race he felt nothing, because he was too focused on his technique. He was focused on trying to surpass his own boundaries and to break his own records.

Coach Arif got a once-in-a-lifetime experience to compete and learn from people who had worked as hard as he had to run not only for themselves, but their countries. The Olympic closing ceremony was especially memorable for Akhundov because it united all the competitors and their coaches. “[We were able to] form relationships with the athletes we had just been competing against on the track.”

This experience has shaped Akhundov as a coach, and it’s apparent in his lessons every day at AISB. The advice he gives to his students? “To try their best, no matter what, because there will be obstacles. But these obstacles are what help you to become a great athlete.”

How to: Create Your Own Service Learning Group