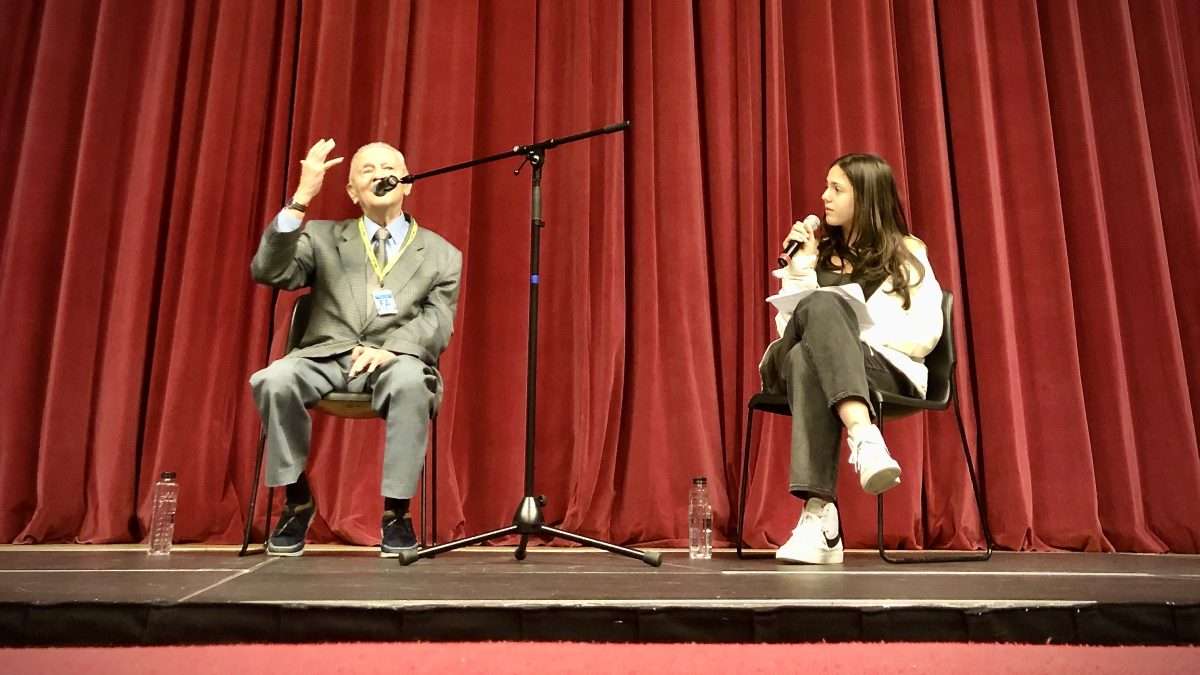 On stage in the theater, Fulop sat in a chair with a microphone in front of him. He wore a suit and tie, and spoke in Romanian, with vivid clarity and detail, as 9th grader Petra translated his words into English. The crowd hung on every word, knowing they were about to experience a once-in-a-lifetime opportunity.

Fulop is among the last remaining Holocaust survivors in Romania, and was among the estimated 500,000 Jewish people living in present-day Romania at the start of the second world war—all of whom were captured and deported to brutal concentration camps.

His story begins in April of 1944, when the Romanian and Hungarian Jewish population in northern Transylvania was gathered by the Nazis and their collaborators inside wagons and sent to the ghettos in Târgu Mureș, in northern Romania. They were kept in a brick factory until it was time to be transported to concentration camps. (Fulop was sent to a total of four camps during the war, including the infamous Auschwitz II-Birkenau Death Camp in Poland.)

In the ghetto, the only way Fulop could describe the environment was “unhygienic; we did what we could with food, but it was absolutely horrible.” At night, the prisoners slept next to where the bricks were burned inside the factory.

Following some time at the brick factory, Fulop was eventually loaded onto a cattle train heading towards the concentration camp in Birkenau. The train cars were packed with around 80 Jews, with a single bucket of water, and one bucket for bathroom purposes for everyone to share.

Throughout that train ride to the concentration camp, the Nazis and the Jewish prisoners crossed Warsaw and passed by an apartment that Fulop specifically noticed— separated from all the other buildings.

Fulop says he noticed a girl in this apartment building, and he could not help but think, “Why should I be locked away because of my religion while she can be free?”

Families were separated in an instant at the concentration camps, often immediately after arrival.

“I had no time to hug, or kiss my mom and grandparents,” Fulop remembers.

He was kept in Birkenau for the next eight months where he spent each night in the shadows of the ovens, where his fellow prisoners were incinerated.

Birkenau was different from the other concentration camps as labor was not so much the focus; it was more about “applying the final solution” and exterminating all of the prisoners that the Nazis sought to get rid of.

“I stayed at Birkenau for 240 days. I could have died 240 times, maybe even more,” recalls Fulop.

Among the more infamous individuals directly involved in running the concentration camps during the second world war was Dr. Josef Mengele, also known as “The Angel of Death.”

Mengele served as an SS officer and physician in Auschwitz, becoming well known for the cruel experiments he ran on the prisoners.

During his time at Auschwitz, Fulop had direct encounters with Dr. Mengele, and was nearly murdered as a result of Mengele’s inhumane actions.

Fulop remembers one day in particular when Dr. Mengele gathered all of the children in Auschwitz together on the football field. He proceeded to grab a wooden plank and nail it into a goal post as a marker for the minimum height required for survival.

When his turn came, Fulop had not quite reached the wooden plank and was sent to extermination. He was kept inside a barrack as he waited to be killed. His first time being trapped inside the barrack, he managed to escape; however he was caught by the SS officers and sent back.

Here is where Fulop developed a slight hope for humanity. With a few seconds left, lights turned on, waiting for the extermination machine to start, Fulop’s life was at its end, until a miracle happened. Fulop created an ambush, causing distress and chaos in the area, allowing a group of Polish prisoners to drag him out of the extermination room and hide him away.

Despite all of the terror surrounding the prisoners, Fulop insists that “this was a humanitarian escape.”

In January of 1945, Auschwitz-Birkenau was evacuated and “the journey of death” commenced. For kilometers that seemed to have no end in sight, dead bodies shot by SS officers laid everywhere—visible in every corner of the human eye. Yet, the prisoners had to march past them: to a new destination where the horrors would only increase.

It was simple: anyone who could not walk anymore would be shot to death on the spot.

Fulop’s eyes saw countless deaths, from walking on roads outlined by the corpses, sleeping right next to them in the hospital, or even watching them take their own lives after losing all hope.

After months of this torture, on the 4th of May, 1945, Fulop was set free from the evil hold of the Nazis. The American Army had arrived and liquidated all of the concentration camps.

“I was at liberty. I could not express this moment. I was finally free.”

Although free, Fulop had no idea what the next step in his life would be; he simply followed where all the troops and prisoners were headed, as far away from the place, and people that had tortured him for years.

He had lost his family. He was alone, weak, and traumatized. Like many other prisoners, Fulop was put in a rehabilitation center. “When I walked in, I weighed 32 kilograms,” he remembers.

And with a deep breath, Fulop closed his story— highlighting that humans should never forget; freedom is what is most valuable in this world; and everyone should fight for it, no matter what it takes.

“Auschwitz is the biggest grave humanity has ever seen,” says Fulop.

Thank you to Mr. Fulop for coming to tell your story. We know you said this was just a small part, but your words were deeply impactful. And as you explained, sharing these stories is the only way to prevent the past from happening again.

If you would like to learn more about the Holocaust and Romania’s involvement in the war, we highly recommend going to the National History Museum (Muzeul National De Istorie a Romaniei) and taking a look at the Romania in al Doilea Razboi Mondial Exhibition.