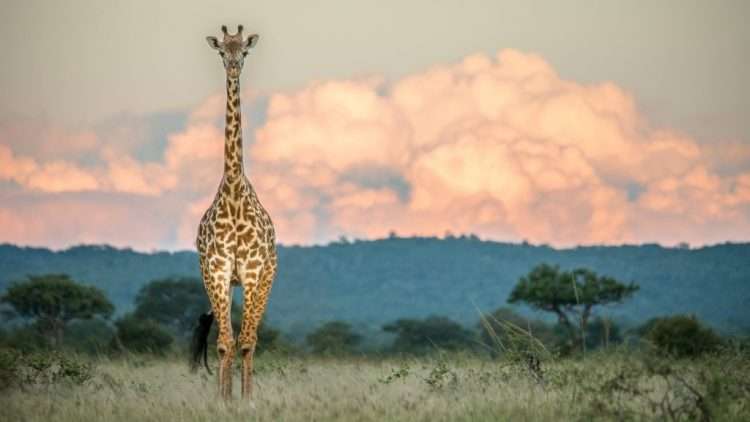 A young boy’s hands fumble, twist and turn, then he aims the apparatus…*Click*. It was the first moment seized, a first memory: A hibiscus.

AISB Science Teacher Peter Stanley took his first photo using a pin-hole camera for a project in his photography class. “The black and white picture wasn’t that great, but the process was pure magic!” Stanley admits. This was the first photo of a photographer’s journey.

This journey began far from Romania. Twenty years of Stanley’s life have been spent in Africa. Growing up, his father was a geologist working with groundwater and his mother worked with women in development. “Their work took us to all corners of the country and their stories are lots of fun to listen to,” Stanley remembers. At only nine months old, he moved to Tanzania where he lived until he was eight, and grew up surrounded by rich cultures and diverse wildlife.

Stanley’s childhood was spent in the African Bush. It ignited the inspirations that molded his future interest in science, which grew alongside his passion for photography. Each photograph combines his passion and profession, and Stanley remarks that science has always been a part of him, just in the form of animals. “The more I learned about elephants and lions, the more I wanted to try and photograph their behaviors and share their stories with the world. Lots of animals are under threat from humans who need to learn more about their situation and photography is one of the most powerful tools to teach with.”

In university, Stanley made the choice to take a semester abroad, which brought him back to Tanzania where he studied wildlife ecology and conservation. “I was very lucky to work with some very well-known scientists like Iain Douglas Hamilton of ‘Save the Elephants.’ We put radio collars on six huge bull elephants in Amboseli National Park in Kenya and flew in his plane to study where they traveled. I used my camera to create a catalogue of all the cross-border bulls I could find,” says Stanley. He even claims he came face-to-face with poachers during his study.

Stanley has learned and is now a strong believer that “we shouldn’t be forced to compromise about things we are passionate about.” He returned to school a couple years ago to continue to pursue his passion, completing his MA in Documentary Photography and Photojournalism. His book (linked below) was his final project. “I love teaching and photography and rather than compromise either, I decided to complete my MA and use my book to try to pull my passion closer to my career.”

While working at AISB, Stanley has found a new bridge between his two lives. Despite his struggle to find time for photography as a full-time teacher and head of the Science Department, he uses his knowledge about photography to incorporate real stories into his teaching, giving his lessons meaning and interesting context. “It helps me teach certain units in biology with real stories and images that brings the content to life for me and hopefully my students,” Stanley reflects.

The combination of growing up in Africa and studying animals has given Stanley the confidence to capture beautiful animals up close. Below, Stanley shares five of his most stunning photographs of animals with a story behind each one. All the photos have won awards, and even the first listed (the giraffe, taken in 2014), was proclaimed “Photo of the Day” by National Geographic. 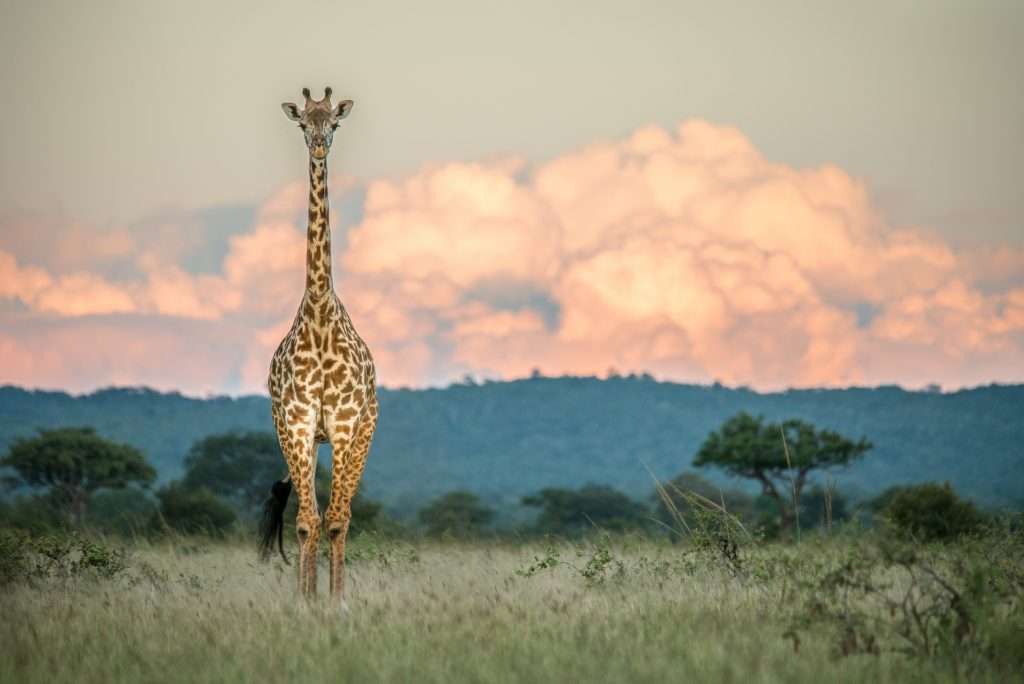 “I was with a few friends and we were watching the sun go down while on safari. I don’t recommend this, but I got out of the car and walked to a bush to photograph some giraffes in the opposite direction. One curious giraffe saw me and started to approach, which is not common. I crouched lower in the grass and focused my camera as it came closer. I got only one photo and the shutter made him turn and walk away. At the time, I didn’t think it was that good, but the chief editor of National Geographic selected it as a photo of the day. The next day, Paul Nicklen had the photo of the day. My brush with my idol.” 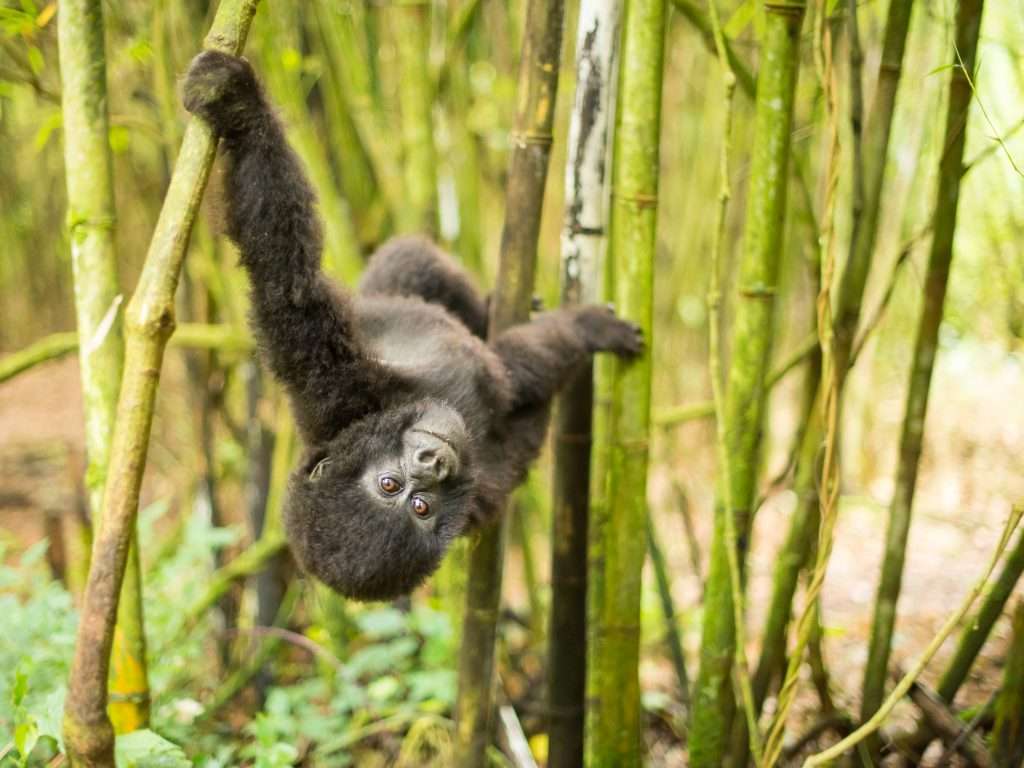 “This little one put on some crazy acrobatics show and was about 50cm in front of my face. His father, a giant silverback, stepped in and grabbed the [spotlight] after a couple minutes and I was told later that this silverback named Guhonda is the largest mountain gorilla in the wild. Exciting time. I submitted this to a few contests and National Geographic used this to promote their wildlife photographer of the year contest… but in the end, it didn’t win.” 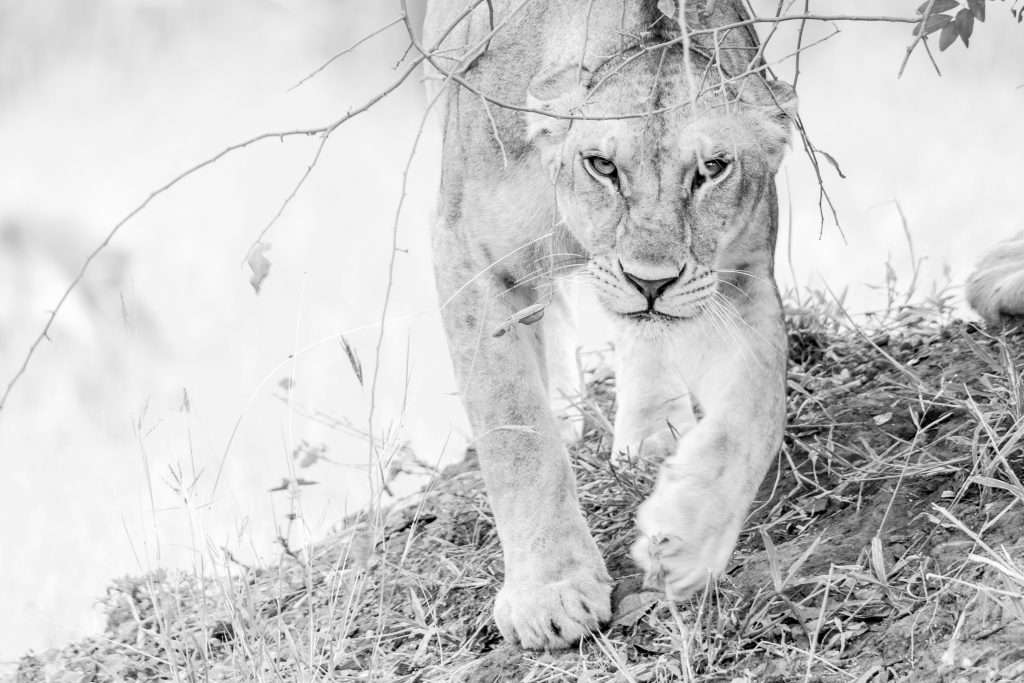 “This was just a bit of luck. I saw two lionesses sleeping on a mound so I focused my camera where I was, hoping she might move when she [woke]. It was pretty shady under the bush so I overexposed to be sure I could get her eyes bright and in focus… then she stood and walked exactly where I had my camera aimed. Good luck for me, click.” 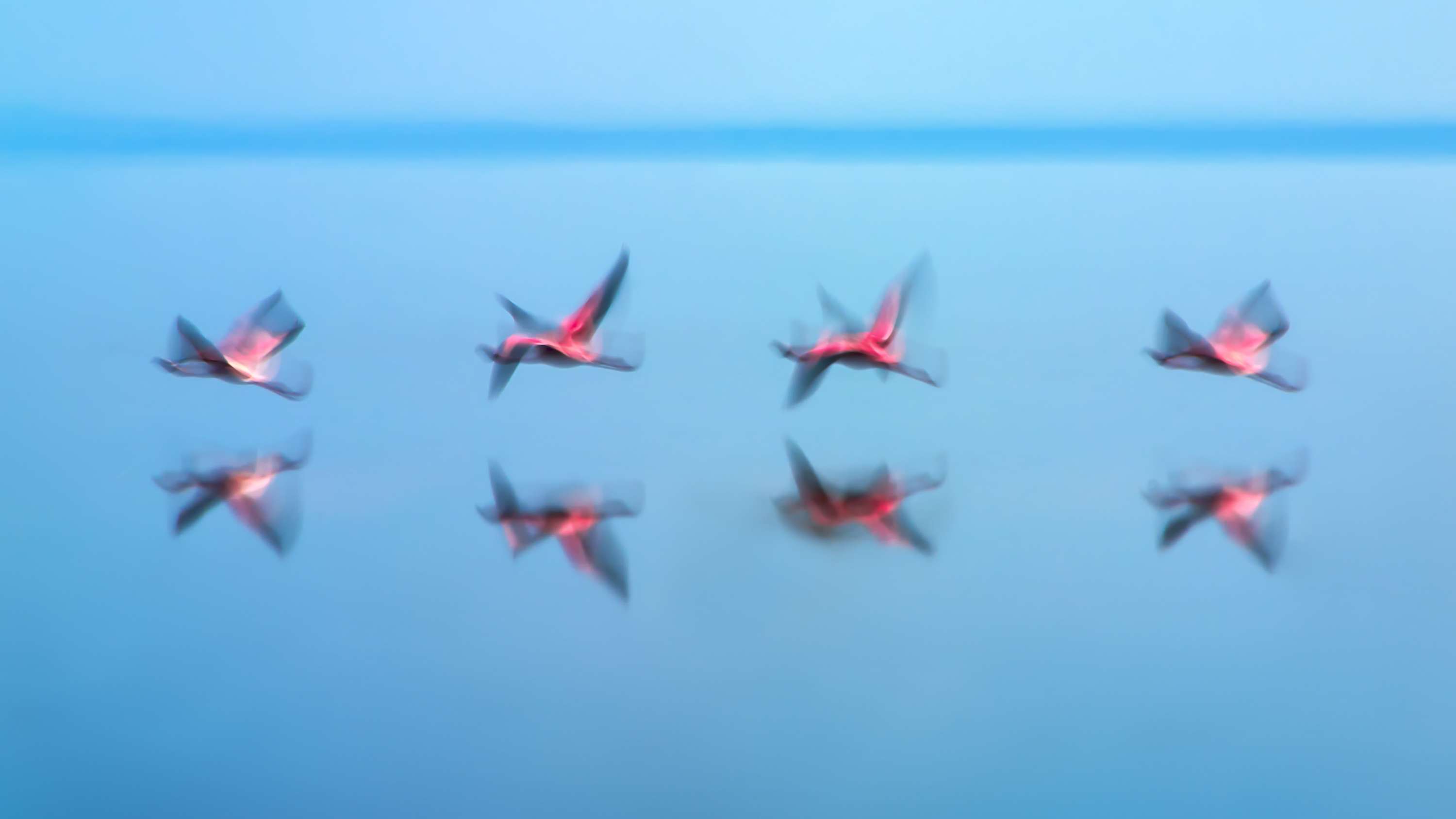 “After a 5-day trek across the crater highlands in Tanzania we ended near Lake Natron, known as a flamingo breeding ground. Unfortunately, we walked there in the middle of the afternoon and the sun angle made for bad photography. Sometimes the worst light is an opportunity so I played around with slow exposures to see if I could turn this into something abstract. I made lots of bad pictures on this day, but this one worked out.” 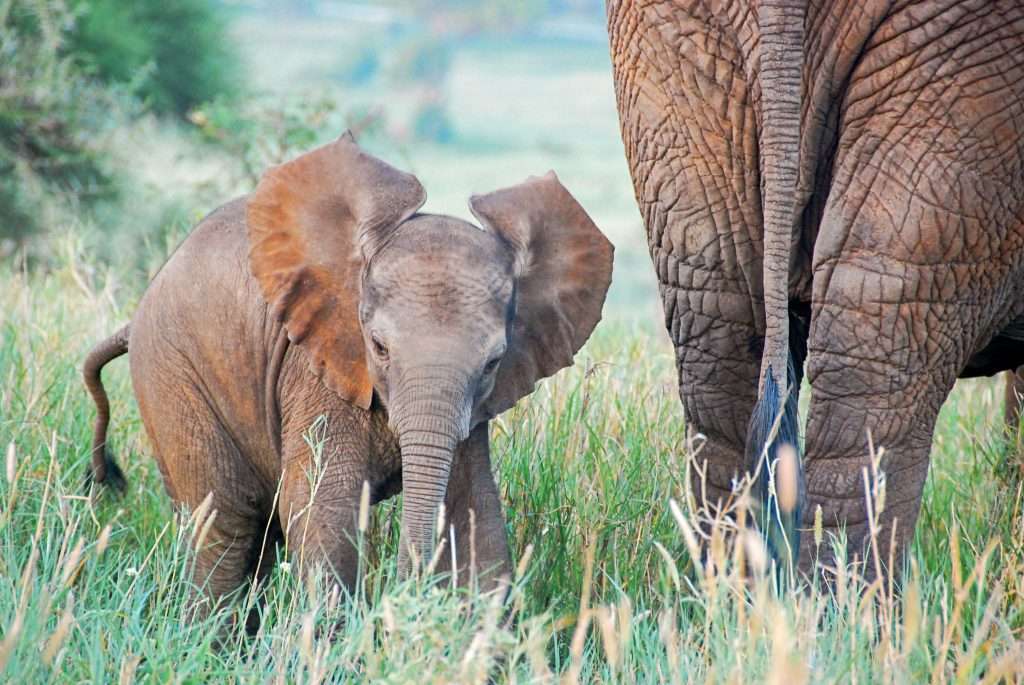 “I actually don’t have that many elephant photographs in comparison to other animals. The reason is I really enjoy just turning off the car, letting a herd move around and listen to the elephants graze. For such huge animals, they are incredibly quiet and gentle. This mother and baby moved so close to our car in Tangier National Park that her tail brushed the dust off the door. The baby started to playfully try to show dominance over our car and make little trumpeting charges and ear flaps. I had to get the picture if only to remember this moment.”

What’s Next for Stanley

After a long journey of inspiration that led to the brink of passion and joyous success, in an ideal future, Stanley says he would enjoy teaching a science class with photography as the main theme, giving context through real world examples. “Physics, how light works and moves through a camera; Biology, capturing life’s most spectacular moments; and Chemistry, studying the chemicals and reaction involved in the development of film.”

To see more of Stanley’s work, you can purchase his book, Speaking with Photographs, here: https://goo.gl/SgjyCo.

Cool and Unusual Places to Visit in Romania