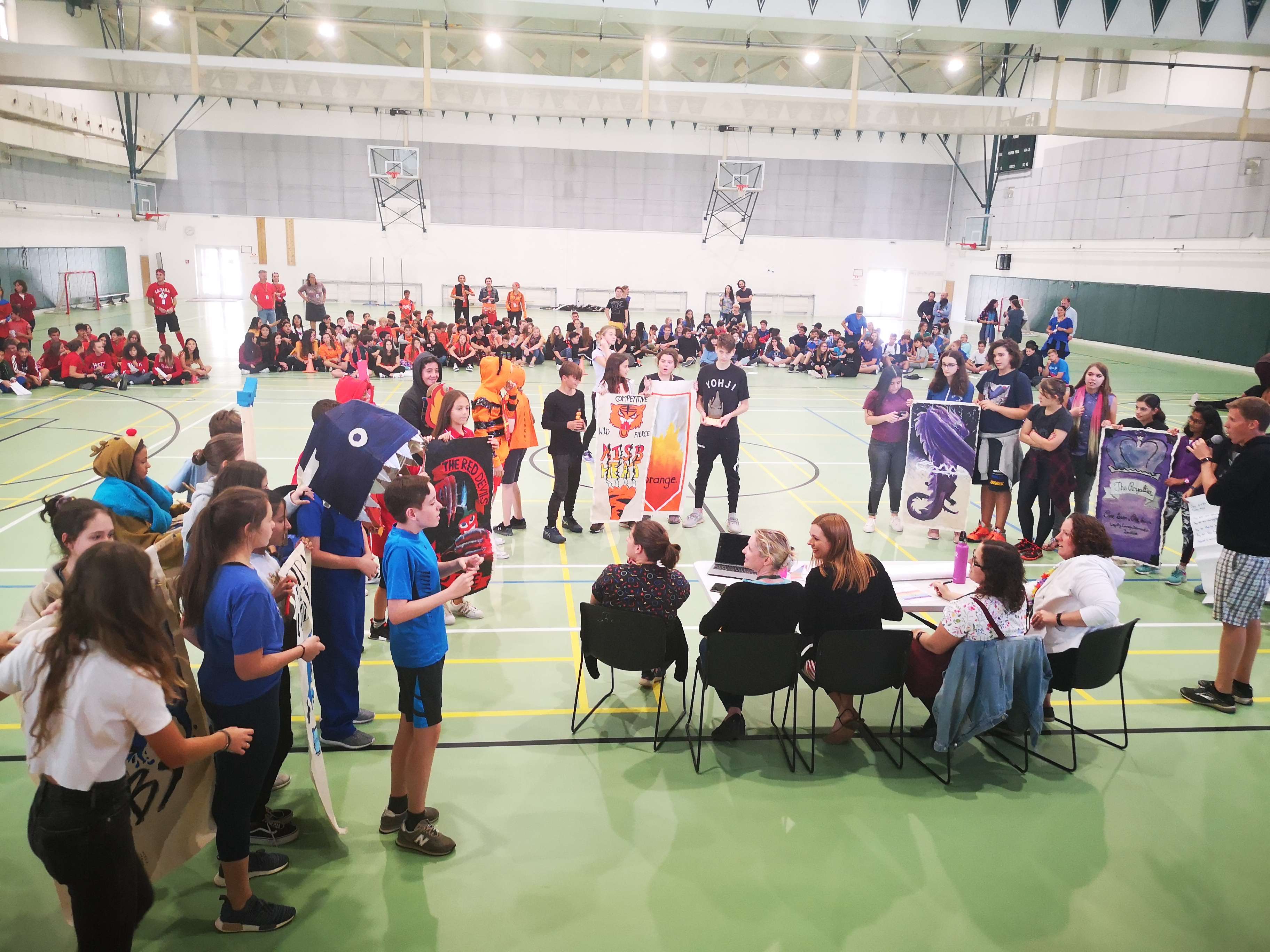 On Friday, September 20th, students from grades 7-10 were separated into four houses – Red, Orange, Blue, and Purple – to participate in various activities to build their “house identities.” Here’s a look at what they came up with, as part of the school’s new house system.

A recap of the day:

After students were split into their houses (advisories ending in .1 went to the orange house, .2 red, .3 blue, and .4 purple), they were then divided into two sub-groups: Grades 7-8 and Grades 9-10. During this period, they came up with their team name, three words that represent their house, and a symbol.

Below are the names decided by the houses:

During the second period, students went to their assigned activity groups to make banners, idols, anthems, chants, mascots, trailers, and t-shirt logos to represent their houses.

There was also a “Roundtable,” where students planned the house activities to take place throughout the rest of the year. Some of the ideas they brainstormed were seasonal sports and pumpkin carving contests.

After lunch, everyone gathered at the gym to begin the first house competition of the year. This is when students got to show off what they had created in the morning.

Four judges – Jaqueline Whitney, Alice Williams, Michaela Young, and Laura Heyting – were in charge of choosing the best banner, chant, anthem, idol, and mascot. After some difficult decisions by the judges, Red team came in first place for winning the most titles.

Regardless of the winner, though, everyone shared an enjoyable moment coming together as a school community.

As explained earlier, one of the challenges was for each house to create a “trailer” to preview/hype up what’s to come during this school year. Here’s the best from each house (each created two):

So, was it a success?

Although the day was a bit chaotic, the students were fully engaged in the activities and motivated to do their best, no matter what grade they were in. So, The Bite definitely sees it as a big success, and so does the school’s leadership team.

With more house events in the future, the students will be able to form a stronger bond with peers from different grades and advisories. Most importantly, they will have an incredible amount of fun.

Tell us: What did you think about the first house competition? Do you have any ideas for future activities? Comment below!

It’s Mental Health Awareness Week at AISB. Here’s What You Need to Know