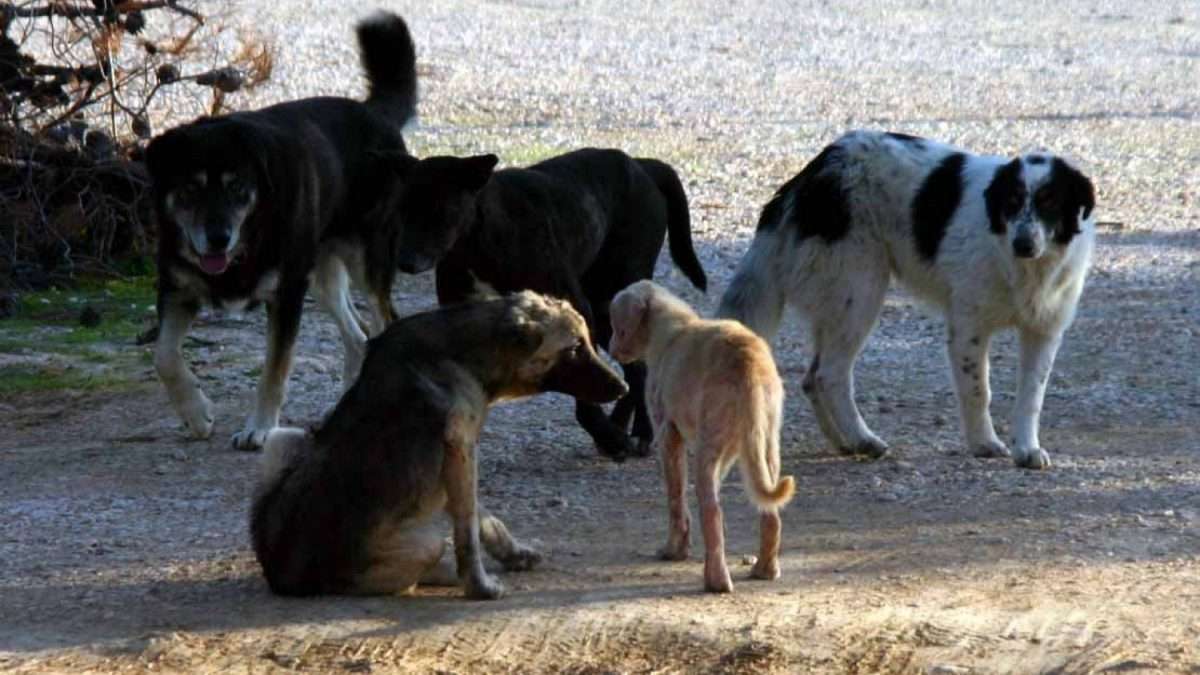 Stock photo of a group of stray dogs.

For decades, Romania has had a complicated relationship with stray animals. Starting during communist rule, citizens were forced to abandon their dogs and move into apartment blocks. And from there, the population of street dogs grew and grew—until there was a campaign to euthanize the animals in 2013, after a child was killed by one.

Despite a mass killing of these animals, in addition to adoption efforts, Romania still has more street dogs and cats than any other European country, at 600,000 (as of 2018). Dog shelters and service groups have been campaigning for change—pushing for new laws and policies—but they face systemic challenges.

“If the spaying campaigns and education had started, I don’t know, ten years ago, most probably now we could have had much more progress,” says Alice Stahie, shelter manager and veterinarian at The Dog Rose.

The Story Behind the Dogs

In an effort to “raise [his] homeland to higher peaks of progress and civilization” (as said in a speech in 1985), communist ruler Nicolae Ceaușescu ordered an industrialization drive, forcing families from the countryside and into block-style apartments. Of course, most of these families had pets and were left with no choice other than to leave their pets behind to roam free.

Former student leader of the PAWS Service Group at AISB, Iulia P, had a second-hand experience with the industrial movement to the city, as her dad was one of the people involved. “Some people [in the countryside] would live in houses and then Ceauceşcu, he built [communal apartments], and people were forced to move to smaller places, smaller apartments, and they couldn’t take their dogs there,” says Iulia, “so what’s happened is that they ended up on the streets.” Iulia says her father didn’t have a pet at the time, but his neighbors and friends did, and he saw how awful it was to leave them behind.

Growing up, Iulia saw the effects of this, remembering packs of wild dogs roaming the streets. “These dogs were taught that humans weren’t trustworthy, so they found their packs and became aggressive,” she explains. “Even though I love animals, it was scary to see these aggressive, big dogs.”

Stahie explains that this situation is so sad because it didn’t have to be this way. “If the people were informed back then, and they would focus more on the situation of the animals also, of course [the stray dog problem] could have been prevented.” Unfortunately, the “systematizing” of rural areas was swift.

What NGOs in Romania are Doing to Help

Over the years, many Non Government Organizations (NGOs) have formed to try and deal with the problem of stray dogs. And while these organizations may have different opinions and methods of doing so, they are all working towards the same main goal: to clear the streets of stray dogs as much as possible.

There is a lot of diversity when it comes to the different responsibilities of NGOs. Some of these organizations focus mainly on veterinary care, and others primarily try to find these dogs a home. A lot of these NGOs also organize campaigns and fundraisers for spaying and sterilizing the dogs.

This diversity can be beneficial, but it also creates challenges among the NGOs, according to Anca Tomescu, veterinarian and president of Animal Society. “Other challenges could be the lack of networking and partnerships with the authorities and other NGOs, for better and sustainable results,” she adds.

Many organizations believe that spaying the female dogs on the streets is the most effective way to reduce the numbers, along with educating the public on the current situation and how to properly manage stray dogs. The catch-neuter-release method (CNR) is known to be a very efficient way of performing mass sterilization.

Anja Mecklenburgh, co-founder of The Dog Rose, agrees that sterilization and spaying dogs is the best way to clear the streets of homeless animals.

“When you spay two dogs, within six years, you’ve prevented 67,000 dogs from being born,” says Mecklenburgh, referring to this graphic.

Founded in 2011, The Dog Rose is an animal sanctuary in Bucharest that is jointly run by Swiss and Romanian animal rights activists. They rescue animals off the streets, providing homes, food, water, and attention. Recently, The Dog Rose has been creating programs and campaigns to help educate the public on the street dogs of Romania.

Animal Society is another NGO in Romania with similar goals to The Dog Rose. They aim to equalize treatment between humans and animals, and find homes for as many animals as possible. Their methods of doing so are very similar to The Dog Rose’s, as they both believe mass sterilization is a humane and sustainable solution to Romania’s stray dog problem. Animal Society also focuses on activities with dogs and children as a form of therapy.

“We aim to change mindsets about stray animals and their potential with the help of former stray dogs, who are also involved in therapy activities for the benefit of children with special needs and institutionalized elderly people,” says Tomescu.

Of course, there are people who don’t believe that sterilizing or spaying their dog is the best thing for them, when in reality it’s the only way to effectively reduce the number of stray dogs on the streets. “Unfortunately, there are people in the authorities like the veterinary director that I spoke with, and they are not convinced,” says Stahie.

Through all the struggles and challenges, NGOs still find a way to fight for what they believe in and make a change for their community, and progress has definitely been made towards the reform of the streets of Romania.

Tomescu says, “We are more optimistic about the future than we dared to be a few years ago, and we hope that through the measures we propose to the authorities and through the programs that we and other associations carry out, these animals will have a future, a much better one.”

Among the many service learning opportunities at AISB, PAWS is a group of students and teachers dedicated to helping local animals.

Unlike most NGOs who are focused on sterilization, PAWS concentrates on raising money for dog shelters and finding “forever homes” for street animals. The group works primarily with The Dog Rose animal shelter, building small houses, raising money for food and toys, and simply keeping the rescued dogs company.

The last two years have proven challenging for PAWS (and all service groups), as the students haven’t been able to visit the shelters. Because of this, they’ve focused on hosting donation drives to provide items like blankets, towels, toys, and food to the animals. They’ve also created an Instagram account to encourage the AISB community to rescue animals—highlighting cute pictures of rescued dogs and cats from PAWS students.

This type of group is common in schools, but seems more important in this country, according to team members. Iulia explains that it’s actually the high number of reported street dogs that inspired her to join PAWS so she could start contributing to the campaigns that help the stray animals. This actually led Iulia to start rescuing and sterilizing animals on her own, creating the nonprofit ‘Ethically Speaking‘ with two of her classmates.

How You Can Help

One of the easiest things to do to improve Romania’s stray dog situation is by spreading the word, so that there is awareness all around the subject. This can be as simple as sharing this article, or any other source of information regarding Romania’s stray dogs.

Since many NGOs are organizing spaying campaigns, it’s also important that we educate ourselves to understand why preventing overpopulation is essential. Controlling the dog population can also be done through adoption and fostering, and who wouldn’t love a dog in their home?

There are many shelters across the country that you can get involved with. Kola Kariola, Casa Lui Patrocle, Red Panda Romania, and The Dog Rose are all animal shelters that are focused on rescuing animals from the streets. Becoming a member, fostering a dog, and donating are all great ways to help out these shelters.

Of course, there are always other NGOs that could use donations, such as this spaying and neutering project.

If you go to AISB, consider joining PAWS to help contribute to their projects and ideas. This can be done by emailing the advisor, Ms. Isa at iseigneur@goaisb.ro.

How to Make High School the Best Years of Your Life: AISB Teachers Reflect On What They Would’ve Done Differently