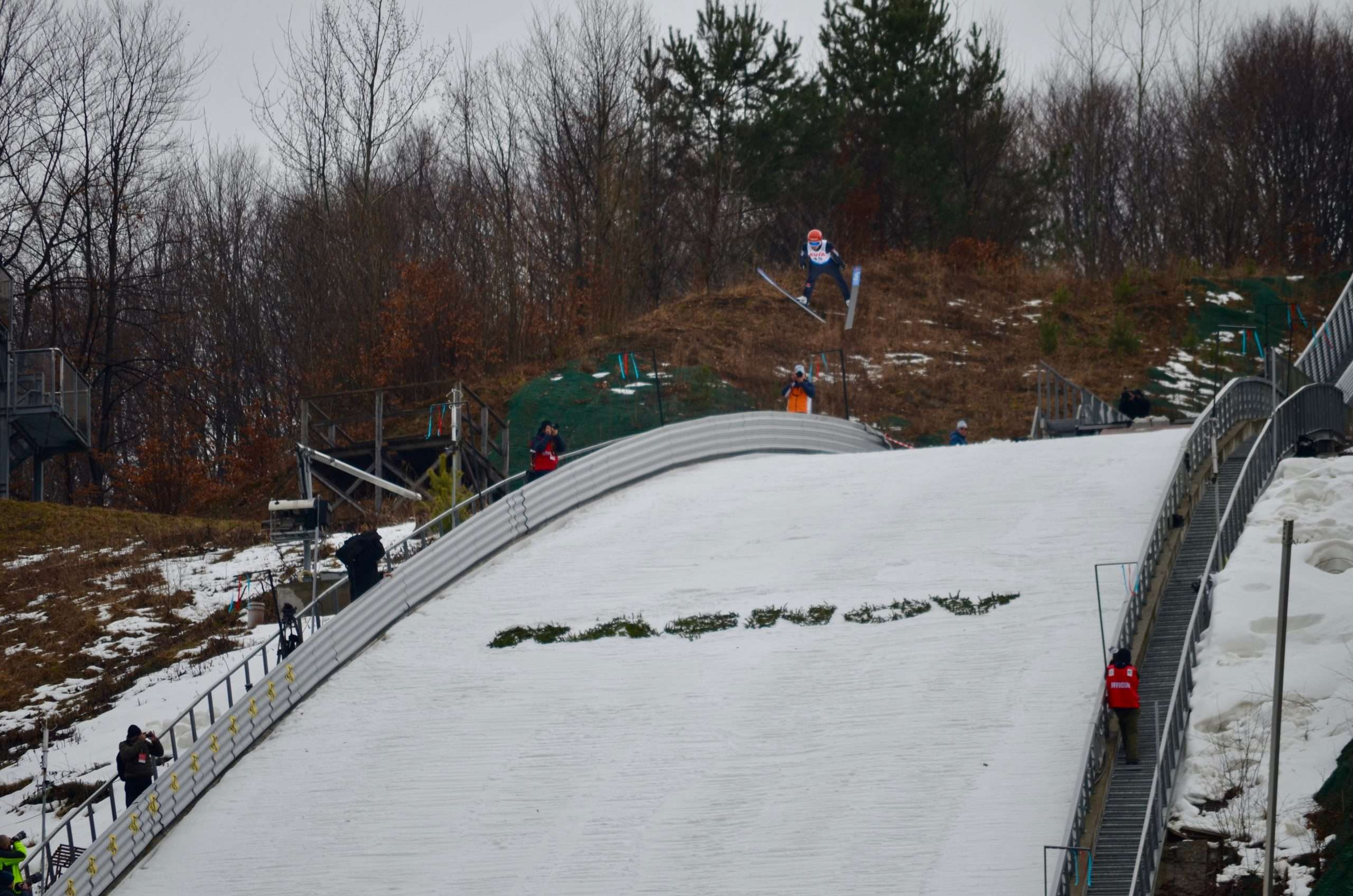 From February 20-22, Rasov became the showplace of the FIS Men’s Ski Jumping World Cup. It’s the first time Romania has hosted this event, and Rasnov was the logical choice, as it’s the only place within the country outfitted for this sport (with four ski jumping hills).

The FIS World Cup is the official international world cup tournament for ski jumping, although there are multiple ‘mini’ world cups that take place across Europe, in Canada, the U.S., and Japan. At the end of the season, all points are added together, resulting in one overall world cup champion.

Only a few fans showed up to the qualifications on Thursday; but nevertheless, the atmosphere was great. The weather offered 7 degrees and a light breeze.

A total of 50 athletes of the 57 participating, made it to the next round through qualifications. Sadly for Romanian fans, ski jumper Daniel Andrei Cacina did not qualify for the second round.

The winner of the day was Marius Lindvik. The 21-year-old Norwegian jumped a total of 98 meters, gaining 124.1 points. In ski jumping, points are calculated considering the following: the distance you jump, landing and wind. There are five judges awarding your performance with 20.0 being the best. The highest and lowest number are canceled out, so the final score only considers the average of the three values in the middle.

Lindvik was closely followed by the number one jumper in the world, Austrian Stefan Kraft, and Markus Eisenbichler from Germany coming in third. Eisenbichler broke the hills record with his jump, now making it 101.0 m.

Dawid Kubacki and Kamil Stoch from the Polish team, came in sixth and seventh. Their teammate Piotr Zyla was 11th.

The next day, the 50 athletes who qualified the day before took another jump with the top 30 athletes competing in the 2nd round of the day.

The weather much worse on day two, with heavy snowfall and wind, causing the second round to be postponed for about 20 minutes. The fans were still excited (especially the Polish visitors), providing an energetic and supportive environment for the athletes.

Similar to day one, the German team stood out. The winner of the day was Germany’s Karl Geiger, with a total of 270.3 points. His teammate, Stephan Leyhe, came in second and Stefan Kraft became in third.

Geiger showed a consistent performance, jumping 100 meters twice in a row. As he told reporter for fis-ski.com, “I really like this venue. it’s a great place for me to jump and I’m really happy about the result,” he explained afterwards.

On Saturday the 22nd, another qualification round took place, as well as two final jumps. More than 4,000 fans showed up to support their favorite athletes, even in the cold weather.

This day was even more suspenseful than the others, with a total of three ski jumpers breaking the distance record of 101.0 m from Markus Eisenbichler. Stefan Kraft, Constantin Schmid, and Gregor Schlierenzauer all jumped 103.0 m, making it the new hill record.

The qualifications and the final round were both won by Austrian Stefan Kraft, making it his 20th World Cup win. After a video analysis from yesterday, he tried improving his mistakes from the days before, which worked out for him.

Both second and third were occupied by the two German team members, Karl Geiger and Constantin Schmid, respectively. It was Schmid’s first time winning a World Cup medal. The 20-year-old told reporters that he “didn’t expect to finish on the podium today,” but wants to continue his good performance in future competitions.

The FIS Men’s Ski Jumping World Cup was a great experience for people of all ages. Ski jumping rules are fairly easy to understand, so you should definitely check out future competitions.

The results seen in Rasnov make the competition even more intense and interesting now, with Karl Geiger and Stefan Kraft both fighting for the title of World Cup champion.

Tell us: Have you ever watched ski jumping? Who do you think will claim the overall World Cup title? Comment below to start a conversation.

A Students' Quick Guide to the US Presidential Election Race