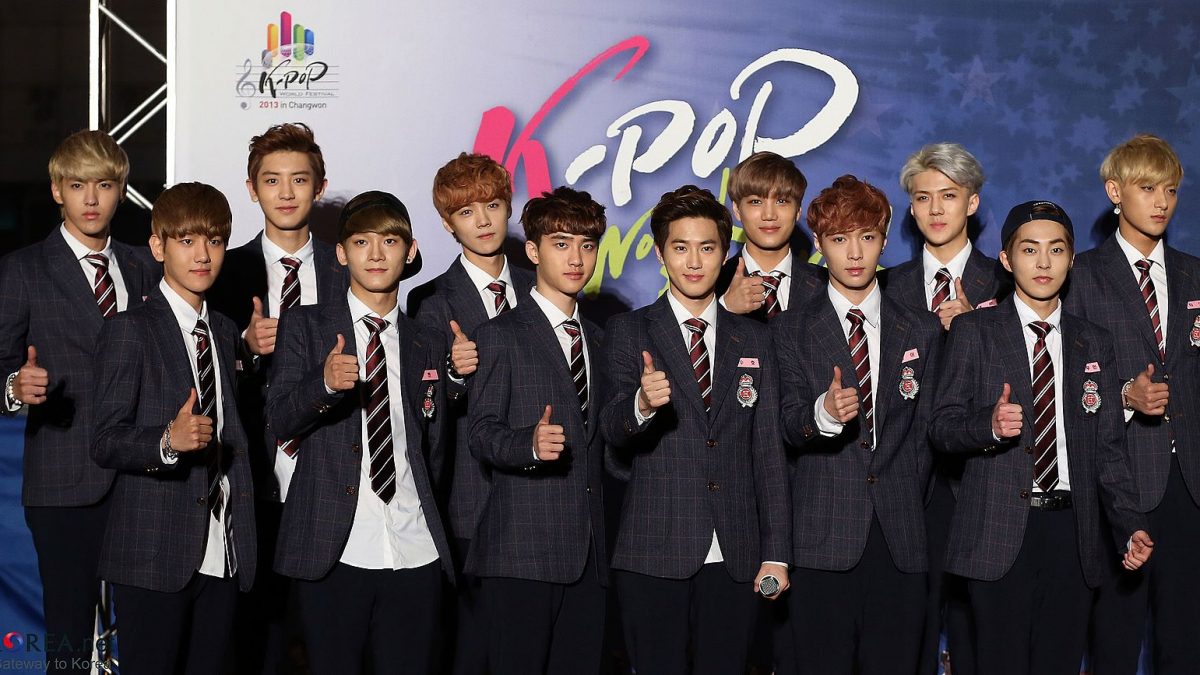 AISB’s Secondary School K-pop squad: a group of girls and sometimes a few guys, eagerly gathered around one bright laptop screen, huddling and cuddling one another, occasionally squealing or singing (badly) in Korean.

Firstly, if you have no idea what I am talking about, I’d like to clarify that K-pop stands for Korean Pop music, and is, obviously, the primary driver for our “fan group’s” daily antics.

Our group consists of people who come from countries ranging from Turkey, to Austria and even Nigeria; very disconnected from South Korea both culturally and geographically. And yet, we all managed to develop a burning passion for artists from that region. One of the reasons why is probably because our world becoming increasingly interrelated and connected due to globalization. More specifically, most of my friends got into K-pop due to their other friends introducing it to them, their friend’s friends introducing it to them, and so on, and so forth.

But the question still remains: why do people like K-pop so much? I’ll try to be as unbiased as I can while explaining this, but here are a few reasons why people get into K-pop.

This is probably one of the more obvious reasons why a person might get into a specific genre of music: the songs themselves. Whether or not you like K-pop, it’s safe to admit that a fair majority of the songs are unmistakably catchy. This is what gets people so hooked to the genre at first; they run into a song, and somehow can’t manage to get it out of their heads.

But don’t just take my word for it. Popular YouTuber, Lily Singh (also known as “IISuperwomanII”), recently tweeted, “I don’t know much about it [K-pop] but it’s super hype! Which other groups should I listen to?!” after making a K-pop reaction video.

A song named Bang Bang Bang by Big Bang is an example of a pretty catchy song. This song is seen as legendary by K-pop idols and K-pop fans alike, even after two years of being released. For me, it’s not one of my favorite songs, but the beat is admittedly very captivating. Science also agrees with this fact; research conducted by students from Rutgers University shows that most songs have a tempo of 119.8 bpm(aka ‘beats per minute’, which refers to the speed of the song). The majority of popular songs tend to have a tempo ranging from 117 to 122 bpm, whereas the song Bang Bang Bang is 135 bpm. Not only does fast music make us happier, but since the tempo lies outside of the norm, it sets the song apart from others and makes it unique. A lot of K-pop songs have some English lyrics in the mix as well, allowing international fans to sing along to their favorite jams without too much trouble.

The Visual Aspects and Aesthetics

K-pop is not only pleasing to the ear, but also pleasing to the eye. To begin with, idols that manage to debut tend to have naturally pretty faces. This is to the extent that some idols are suspected of having plastic surgery which, sometimes, may be the case. From flashy hair colors (including blue, red, green, and even bright pink), to experienced hair stylists who try a variety of hair-dos, or hard-working makeup artists that fill fans with envy; they all contribute to the K-pop industry’s gorgeous musicians. Plus, when considering the fact that K-pop groups usually have lots of members – ranging from as little as five to as many as 10 or even 13 people – it’s fair to say that K-pop fans are able to enjoy an explosion of color and good looks. That being said, smaller groups still manage to give off that same effect, like a girl group named Blackpink in their music video (MV) Whistle, for example.

Other than that, it has become more and more evident that K-pop producers have concentrated on making their music videos as attractive as possible, focusing on colour coordination and aesthetics. There are plenty of aesthetically pleasing music videos, but BTS are often seen as the aesthetic kings. One of my personal favourites has to be their MV Blood Sweat and Tears, Japanese version; the colours and effects in the Japanese version astound me every time.

Although ‘talent’ is a very broad word to use, all K-pop idols have a proficient level of skill in singing, rapping, dancing, or even all three. This is no surprise if one considers how long each idol has to train for before they even debut; Hyoyeon and Seohyun of Girls Generation trained for 5-7 years, EXO’s Suho trained for 6 years, and G-Dragon of Big Bang trained for a total of 11 years.

A group named Seventeen is well-known for their choreography and synchronisation. Considering that Seventeen is a self-producing group (meaning that they write songs, produce songs, and choreograph by themselves), their 2-6 year training periods make sense. In their MV Don’t Wanna Cry, every single one of the members who usually raps can also be heard singing. Despite the fact that they are comprised of 13 members, they are all completely synchronised and full of passion when they dance. On a variety show called Weekly Idol, they even managed to do the choreography with double speed; it truly shows off the amount of teamwork and practice required to perform that well.

Change and originality are very important things that the K-pop industry uses to keep their fans hooked. Whether it be cute, mysterious, depressing or fun, K-pop companies make sure that music videos and the idols themselves are portrayed through a variety of concepts.

Take a group named Monsta X, for example. Their main ‘theme’ I would say, is brotherhood, yet they manage to represent it in a variety of story lines in their MVs. Shine Forever portrays it through fights and regret; Newton shows it through joy and brotherly bonding; and their latest MV, Dramarama, represents this theme through hardship and sacrifice. Still, whatever the group, fans are always kept on their toes, wondering which concept each group will have next.

Something that motivates a lot of fans to re-watch old MVs is to figure out theories. Some music videos are so profound or confusing that fans are forced to believe that there must be some hidden meaning behind them. These are referred to as “theories” in the K-pop world– speculated meanings or themes in (mostly) music videos. In my opinion, this is one of the most interesting and enjoyable parts of being a K-pop fan. Coming up with your own theories and combining them with your friends’ theories, or theories made by fans all the way across the world; it gives a sense of unity and accomplishment when others think that your theories are plausible. It’s also nice to share a mutual bewilderment and frustration when K-pop companies refuse to disclose the truth about what the true meanings behind their music videos are.

BTS is also known as one of the groups with the most theories. They even began releasing a series of short films for their latest album (along with previous albums), as if to add even more fuel to the fire that is perplexing fan theories. From death and murder, to self love and depression, to even time travel; BTS take joy in baffling their fans with videos that are just really, really deep.

The Personality and Variety

Lastly, my favorite part about K-pop has to be the amount of variety and humor that comes with it. New fans tend to get into K-pop simply because of what’s on the surface, like how idols look, behave, and act in music videos. However, what I believe causes fans to stay is what’s beneath the surface– the idols being able to be themselves. Idols frequently appear on variety/reality shows, in which they do Q&A’s, member profiles, and generally zany challenges for the purpose of fans to see what they are truly like “behind the scenes.” They also do live shows on an app called V Live, which gives fans all sorts of opportunities to create inside jokes about funny phrases or faces that idols make. I feel that the connection and relatability with an idol’s personality is what turns people from casual fans, to protective mother figures for their favourite idols.

Staying in Bucharest Over Winter Break? We've Got You Covered.