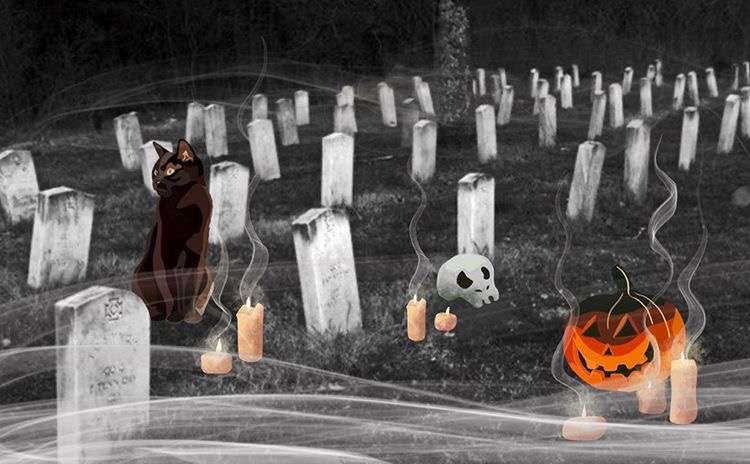 Grab a cozy blanket, prepare a cup of hot chocolate, and settle in for some spooky short stories, written by students from AISB’s Writing for Fiction after-school activity.

The first piece was written by Marta from 9th grade and is a descriptive micro fiction story about finding an abandoned house in the middle of the forest. The second is from another grade nine student, Luca, which depicts a graphic encounter a group of kidnapped citizens have with a creature of the woods. And last, Lena from grade 10 tells a tale about a family of three trapped alone in a forest.

We hope you enjoy.

We were walking through the forest, talking loudly and having fun when Matt, the joker of our friend group, started running after me, laughing hysterically. He chased me through the forest and was beginning to catch up when suddenly my foot slipped. I slid down a long path and fell in a big pile of dry autumn leaves.

As I slowly got up, shaking myself off, I saw a tall, abandoned house right in front of me. It looked just like the ones you see in scary movies, the ones I used to have nightmares about when I was younger.

I looked around, but Matt was nowhere to be seen.

A gust of wind blew. Shivers crawled down my spine. My mind was telling me to run away as fast as I could, but my legs seemed to think differently. An invisible force was pulling me closer.

I slowly crept to the front of the house and looked up at it. It was so old and decayed, but its elegance seemed to have never left it, pulling me closer and closer. Thick layers of dust covered every window but one, which was open.

I shivered but began to take a step towards the door. Then I heard Matt’s voice echoing loudly in my ear.

“I’m coming!” I shouted, running back to the path.

Looking back, I froze. A dark shadow stood in the now lit-up window.

We’d been walking for hours. Many had fallen along the way, but we couldn’t stop. Not that we didn’t want to, but rather we couldn’t—being marched all the way from our homes to God-knows-where. Fear and stress were the only things on our minds.

Every once in a while we’d hear a “thump,” meaning someone else had given up.

I never got used to it.

After hours of silence, a guard yelled, “Faster! If we aren’t there by midnight, you’ll be the ones paying the price!”

Startled, I almost tripped over an overgrown branch. The dark trees were surrounding us. Outnumbering us a hundred to one. The fog hung so thick around us, it was suffocating. We could barely see a few meters in front of us.

No sounds of birds, no animals. Just the heavy, rhythmic footsteps of our long march.

We all missed our homes, which we’d been dragged out of forcefully by our captors. The screams of women and children during the occupation were enough to make a grown man’s blood freeze with fear.

There were almost thirty of us, along with ten guards, escorting us away from our hometown.

Suddenly, a guard yelled, “HALT!” and we stopped in our tracks. Confused as to why we were stopped, our whispers filled the silence of the forest. Our captors crept forward, with terrified expressions on their faces.

In front of us, the horrifying scene came into view. The first line of our guard detail was scattered across the forest floor, splayed out, in unnatural ways. Limbs were missing, the dark red blood splattered to create abstract paintings on the trees around us. It all happened without a sound.

Everyone, including the guards this time, stood frozen in shock, and absolute fear.

“Tell Squad Delta that we’ve encountered a threat, and are in need of reinforceme-” were the last words we heard before the growling.

All around us, coming from the fog, which had gotten even thicker than before, were low-pitched, horrible growls. We were all huddled up into a circle, scrambling to get into the middle.

During the chaos, I tripped over someone’s boots and landed face-first onto a rock. Blacking out, my ears ringing from the impact, I saw the guards’ mouths quickly opening and closing, possibly yelling orders to one another, but I couldn’t hear them over the ringing.

The bright fire from the weapons of the guards lit up the small perimeter around me. Feeling the warm splashes of blood on my face and onto my eyes, I could no longer see. I could hear the faint screams, thumps, gunshots. But less, and less. And less. Until silence.

What is happening? How did I get here? As a matter of fact, where am I?

Suddenly I heard a a whisper. “Why did you leave me?”

My memories rushed me—a pang of fear, sadness, betrayal—all at once.

I woke up. I was in the same place where I passed out. The forest.

You may be wondering how I got here, what happened to me, and of course the most obvious, who I am.

My name is Jessie, I’m a 16-year-old teenager. And how did I get here?

Well, let me tell you… We were out on a walk, just a walk…That’s what it was supposed to be anyway.

I remember clearly how I saw something in between the trees. It didn’t look human; it was something new, something I had never seen before.

Of course being the person I am, I stepped off the winding trail and followed it, only to get lost. I didn’t realize how dark it was until I looked up at the sky.

I called out to my parents, but got no response. I walked around for hours, trying anything I could think of to get back to them, but I left my phone in the car and didn’t have much else I could do.

When I realized how cold it was getting—of course it was cold Jessie, it’s the middle of October— I started to build a fire. Well, I tried anyways. I couldn’t get it going. So much for summer camp. I found a dry spot of leaves and tried to curl up in an attempt to get more warmth.

I only got a few winks of sleep when I heard someone calling out to me. It was still dark, but I managed the outline of my parents. I ran to them at full speed, calling their names.

“Jessie, oh thank God you’re alright! We were so worried!” My mom shouted at me.

I stopped a few meters away from them. “Mom! Dad!”

Their expressions changed suddenly—eyes wide and foreheads furrowed. They looked scared. Were they scared of…me? I stopped. “What’s wrong?”

“No, stay away!” my mother screamed.

“Stay back! You are not our daughter!” This time it was my father yelling at me.

“No, please just stay away!” my mother screamed.

What was going on?

My father started to yell to my mother, “Run, Mary! Run now!”

My mother and father ran away from me that night, away from the ‘monster’ they saw. And I stood there, tears filling my eyes. I broke down and fell to my knees, head pounding. And that’s when I heard it, the whisper, the being I saw in the trees: “Don’t worry child, I’ll take care of you, you only need me,” it whispered softly.

I looked around frantically, yet I couldn’t see where the voice was coming from. Everything became blurry and I passed out.

When I cam to, I was alone, hungry, and most of all, scared. It was morning and they daylight revealed everything that was once hidden in the forest. So I started to walk, and continued until it became dark again.

I felt something push me, yet nothing was around, I kept walking, thinking I was hallucinating, but I felt that push again.

Suddenly I saw something forming right in front of my eyes.

I took a step back, and the darkness took the shape of a man—tall and fit, with dark black hair that curled in front. He had dark eyes that seemed to stare into my soul. I felt frightened, yet at the same time, I felt relaxed, like I was supposed to be there.

He smiled and said the exact same words I heard the night before,, “Don’t worry child, I’ll take care of you. You only need me.”

I’m not sure what came over me, but I ran, I ran so fast I could hardly register what I was doing, but I ran… straight into the mystery man’s arms.

I cried as he held me tightly. “I promise I won’t leave you like they did. My name is Death by the way.”

I looked up at him with shock and he replied with a smirk. This is Death? He felt like life.

From that day onward, we spent every minute together. He was my new father. He taught me everything about how the world works. He told me that humans would always be scared of what they couldn’t understand. And this is why my parents ran. This is why I felt scared; because I didn’t understand.

Now I do. I understand clearly who and what I am.

I am terrifying. I am a monster.

I am… Death’s daughter.

If you would like to read more stories like these or create your own, you can contact Ms. Billi Jones at bjones@goaisb.ro or Ms. Cristina Turbatu at cturbatu@goaisb.ro to join their Creative Writing CCA!