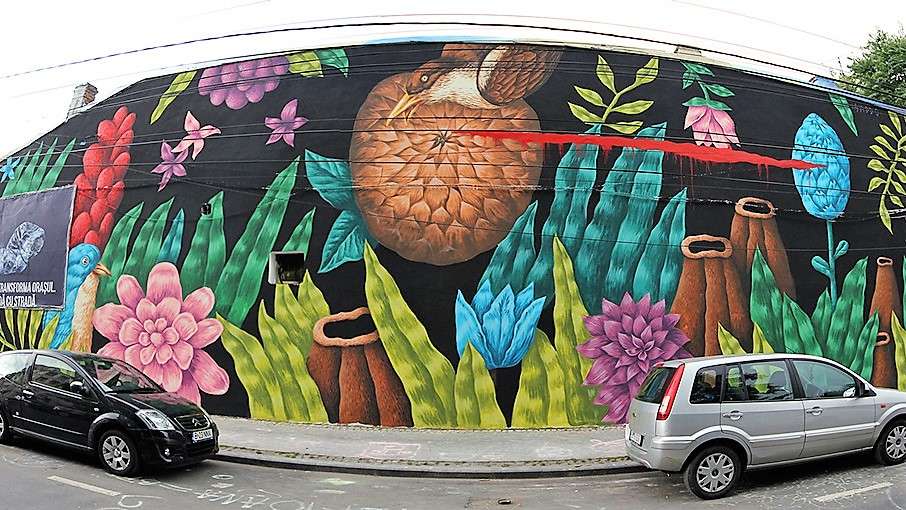 Strada Arthur Verona, located next to the Athenaeum, is a street known as a major part of the Urban Culture in Bucharest. It is a street whose walls are covered in graffiti–some meaningful, some just beautiful.

But it wasn’t always this way. In 2016, the once old, neglected road was adopted by popular Romanian book shop chain Cărturești, and the Romanian Architect’s Guild, in order to create a yearly event dedicated to urban art and architecture.  And so Street Delivery was born.

The project was inspired by Bucharest’s “infernal traffic” and a movement that started in London in the 90’s, called “Reclaim the Streets,” that conveys the idea that streets belong to the people and deserve to be released from the dominance of automobiles.

“The initial idea was to invite several communities in Bucharest – creative tribes, artists, urbanists, architects, etc. – to ‘furnish’ the street with their ideas of a friendlier version of our city,” says Neagro. The event was a hit from the beginning, and it has become a yearly tradition even until today.

Street Delivery has been hosted in six cities in Romania and will hopefully soon be expanding as far as Chisinau (Republic of Moldova), Ruse (Bulgaria), Kiev (Ukraine) and even Brussels (Belgium).

Every year, the event has a different theme, which is incorporated in all of the activities and works that are featured throughout the week-long celebration of art. Initially, there wasn’t a theme until the team realized that if they did offer a thinking subject, they would receive more applications and the projects would be more focused.

The themes are picked depending on the needs presented by the city. Some of the previous themes were “Possible Gardens” (the possibility of urban gardens), “Meserie!” (meaning Job! and the bridge between old and new working techniques), and “Global Warning” (our city in terms of climate change).

Some of the most interesting activities featured last year were:

“At Street Delivery, we encourage the idea that street art is a fantastic art form as long as it is given space, time and resources,” says Neagoe when asked about his opinion on vandalistic graffiti – a big issue in Bucharest. It is very common to try to explore Bucharest and its landmarks, only to see embarrassing self-promotion on the column of a sculpture or the walls of a historic building. One example is the Rosenthal Block, a historical monument, pictured below:

“I think many of those who live in Bucharest do not perceive the city as their own, because otherwise they would treat it differently,” says Neagoe. “Of course you pay your taxes in order for the garbage service to collect your garbage, but that does not mean that you have the right to discard of your waste in the middle of the street or in green spaces.”

Another issue in Bucharest is the detached attitude of its citizens. Most people think that, because they pay their taxes, they don’t actually have to take action in order to change something that bothers them. This can also explain the reason why so many people feel the need to destroy monuments and vandalize beautiful buildings such as the Rosenthal Block, as a sort of revolt to the government for not properly taking care of their city.

Luckily, Street Delivery is a new way in which citizens can voice their problems in a peaceful and direct manner. One example of this is another event organized by Carturesti, called Train Delivery. “It transforms Gara de Nord (The main train station in Bucharest) from a dirty tedious place into a colored happy environment for a few days,” says Neagoe.

This is a perfect example of the ways in which people can improve the space around them by taking matters into their own hands, and doing it in an artistic, creative, and beautiful way.

Other events that were inspired by Street Delivery include Strada de Carte (The Street of Books), a few alleys in the Center of Bucharest on which book stands were placed and books were sold, and Dambovita Delivery, which was the revitalization of a portion of the iconic river in Bucharest for its citizens.

Recently, the company who owns a building (intersection of Strada Arthur Verona and Dionisie Lupu) where Street Delivery artists painted, announced that the house will be demolished in order to erect an office building.

When asked about this, Neagoe said, “As they say, a well-placed bribe can go a long way. Until now, the building hasn’t been taken down, but if it will, we will find other spaces in which we can continue giving the city more personality using art.”

Show your support for Street Delivery by showing up to this year’s fair in June, and stand up to the artistic injustice happening in Bucharest! For more information, visit www.streetdelivery.ro/bucuresti.

Top 5 Books to Read This Semester