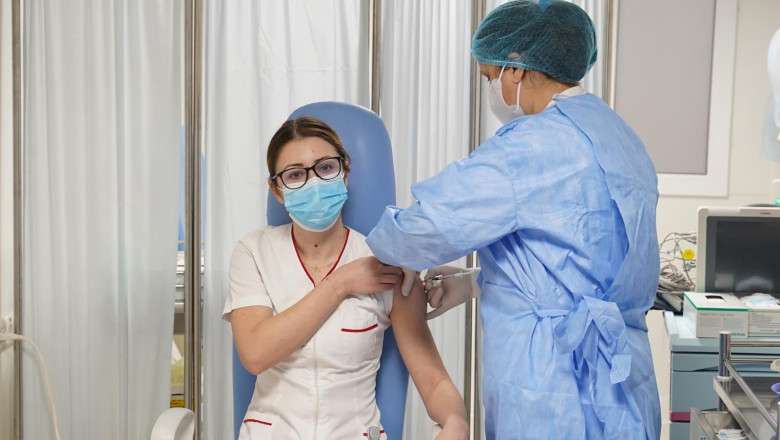 In mid-December, Romanian authorities announced that the country would start its vaccination rollout on the 27th—giving us hope that all the glitchy Zoom classes, Netflix binge marathons, and social distancing would finally come to an end.

So far, distribution has been going quite well by comparison, and health officials are hopeful that by summer, 60-70% of the population will be vaccinated.

Which vaccines have been approved in Romania?

The Pfizer and Moderna vaccines have similar efficacy rates (95% for Pfizer and 94.5% for Moderna) and require two jabs—three weeks apart for the Pfizer vaccine and four weeks apart for Moderna. They are also both mRNA vaccines, meaning that they rely on genetic code (RNA) instead of weakened virus to create an immune response. (For a more comprehensive explanation of mRNA vaccines, read this article from the CDC.) The AstraZeneca vaccine has a lower efficacy rate (63.09% in preliminary trials) and is made from a weakened version of a common cold virus, referred to as adenovirus vector.

According to Andrei Banciu, Secretary of State in the Ministry of Health and Vice President of the National Committee for the Coordination of the Vaccination Campaign (CNCAV), Romania is expected to receive 400 thousand doses from Moderna and 2.5 million from Pfizer in the first trimester (from now until March). Moderna will deliver doses on a bi-weekly basis while Pfizer is expected to deliver weekly doses.

AISB Doctor Anita Pop confirms that AstraZeneca vaccines are currently in low supply, with just 2,000 doses available in Bucharest, and 500 doses in Ilfov as of yesterday. However, the country is expected to receive 800,000 doses by month’s end, according to Valeriu Gheorghiţă, the coordinator of Romania’s national vaccination campaign against Covid-19.

If all goes to plan, Romania will be able to vaccinate more than 10 million of its residents by September.

How it’s going so far: A Q&A with Local Doctor, Cristina Coman

Dr. Cristina Coman, a pediatrician working at the Emergency Hospital of Saint Pantelimon, was one of the first individuals to receive the Pfizer vaccine in Romania, and has been closely observing the distribution process. Here, she shares her experience and thoughts on the matter. (Note that the interview was conducted in Romanian and translated to English with permission.)

Q: How is the vaccine administered?

Q: When did you take the first and second dose of the Pfizer vaccine?

Q: Did you experience any symptoms after the administration of the vaccine?

A: The muscles in my left arm hurt, and about 12 hours after the injection I had an intense pain in my upper left shoulder (the area where the injection was administered). After 24 hours, I had symptoms similar to the flu. For the second dose, the symptoms debuted much faster. The intense pain in my upper left shoulder happened after just 2 to 3 hours after the injection and the flu-like symptoms occurred after around 12 hours. I had chills, a slight increase in temperature (around 37 degrees celsius), and, again, pain in the muscle.

Q: Because the vaccines have to be kept at extremely low temperatures, have there been any problems related to storage?

A: In my center (Emergency Hospital of Saint Pantelimon), there have not been any complications; although I am aware that there have been problems in regards to the refrigerators in which the vaccines are being stored and there have been a few doses compromised. This problem has also occurred in the United States, where a much larger quantity of vaccines have been compromised.

Q: How do you think the distribution process is going?

A: The process is going well. There have been problems with postponing vaccinations due to supply. Pfizer is currently expanding their production capacity, thus their production is experiencing a delay, and so sometimes we do not have the doses to vaccinate. Regarding the organizational aspect, from what I have seen at my center, the organization is very good and extremely efficient. No one is wasting their time. Everything is happening really quickly.

Q: Do you believe that the goal of having 10 million individuals vaccinated by September is realistic?

A: It is realistic as long as the doses are being delivered on time and in the correct amount. This objective was based on a number of doses acquired. If the doses will be delivered according to the plan, the quantity will be respected. I do not see why the objective can not be achieved.

The Vaccination timeline in Romania: Understanding the three stages of distribution

According to the Romanian government’s official platform for COVID-19 vaccine information, distribution can be split into three stages, each targeting different groups of people at different times.

Who: Frontline workers in the public and private system.

140, 400 of the medical personnel were vaccinated during this stage.

Who: Individuals of high risk, including adults over the age of 65, people with chronic diseases (regardless of age), and “essential workers” (including our teachers).

As of right now there are 500.000 individuals programmed to administer the COVID-19 vaccine by the 8th of February.

According to Valeriu Gheorghita, the coordinator of the anti-COVID-19 vaccination campaign, the third stage will begin with the condition that 5.5 million people will be vaccinated by the end of the second stage.

Who: The general population. Currently, the vaccines are only recommended for people over the age of 18, but the CDC has recently announced their endorsement for ages 16 and older. This could be a changing development throughout the distribution process.

Romania’s distribution as of today

While the Romanian government reports that only 3-4% of the population have been vaccinated, the country still ranks above most countries in regards to distribution.

Two weeks ago, in article from HotNews, Gheorghiţă stated that “Since January 18, the number of newly vaccinated people has been over 30,000 daily. Today we had over 35,000. We also started [distributing the second dose] for those [vaccinated]  from the initial stage. That brings us to over 39,000 doses done today.”

Since then, news from the National Committee for the Coordination of the Vaccination Campaign has emerged, stating that the vaccination process has been postponed by 17 days, meaning that the second stage of vaccination will take place after the 16th of February. G4Media.ro explains that the postponement occurred due to a lack of vaccines, as stated above, by Coman.

People who already have vaccination appointments can expect possible delays, as authorities report being short 117,000 doses. People affected will receive an email two days prior to their original appointment. The school’s Manager of Admissions & External Relations Catalina Gardescu, who has worked to secure teacher appointments, says, “As far as I know now, this delay will happen only with people scheduled between Jan 28 and Feb 11. I am hoping we (AISB staff members) luck out.”

How this will affect school reopenings

On the 14th of January, during a meeting at Palatul Cotroceni, President Klaus Iohannis announced that once the second semester begins, most schools will be open to teach in-person. As we know from our current adapted model, on-campus learning looks very different than it used to, and we won’t return to “normal” until case numbers drop substantially.

There are three scenarios the government takes into account: green, yellow, and red. We are currently in the yellow scenario, where less than 3 per 1,000 residents are infected. As long as that number holds, schools can remain open. If we go into the red scenario (more than 4 people infected out of 1,000), kindergarteners and elementary students may still be able to learn on campus, but everyone else will go back to distance learning. If the infection rate rises above 6, the area will need to quarantine and schools will close completely. When we get to less than 1 case per 1,000, schools will be able to reopen again, fully.

“The green scenario allows us to have full days and to run a full schedule,” explains AISB Director Peter Welch. “What we seem to agree on—schools around the world and international schools—is that the basic health measures that we have gotten used to such as mask wearing, physical distance, etc, will have to stay in place in schools for some time.”

Welch confirms that most AISB staff members will be fully vaccinated by the first week of April, which is a huge step in the reopening process, as it allows the community to feel a higher “sense of safety,” but warns that students should remain realistic. “Although we will come back on the green scenario, and as a high school student you will be running a full schedule, you will probably be sitting in a room with a desk spaced apart, you will probably be wearing a mask, and so forth.”

It’s important to stay optimistic about the current situation, but also realistic. When feeling down and alone, always remember that we are going through this chaotic journey together. Why are we staying at home, washing our hands, wearing our masks and social distancing? To keep ourselves healthy and protect the people around us.

This is the beginning of the end. We made it this far, and things will only get better from here.