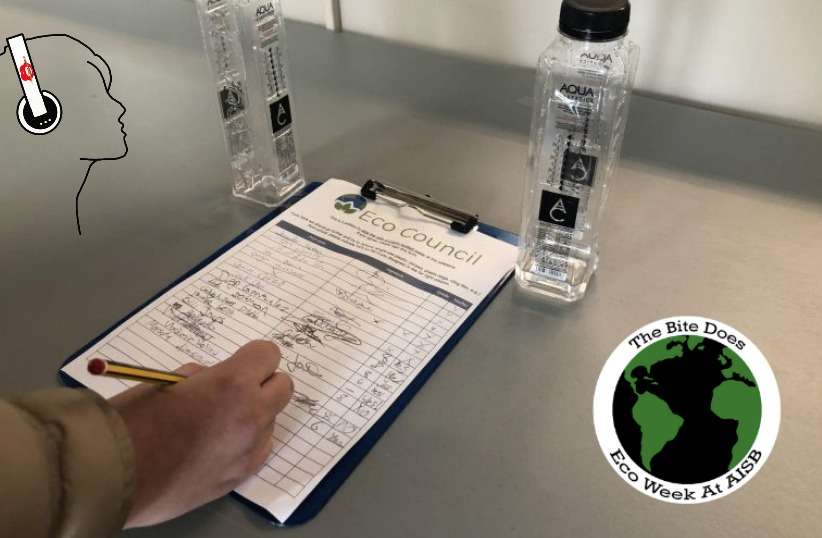 In order to become a certified “Eco school,” AISB has to meet certain criteria. One of the most important? Stop selling plastic bottles on school grounds.

Over the past few months, the Eco Council has been running a petition to stop these sales. And according to their advisor, Environmental Change Agent Marion Siekierski, this is a mindset that we must promote as a school. “Single plastic is a huge issue,” she says. “We have to do as much as we can to stop it.”

When asked how many plastic bottles were sold at AISB’s cafe each day, the cafeteria manager reported that 50 were sold on March 25th (the day before we asked). The school is responsible for contributing around 250 bottles per week and 1,000 per month to landfills–which points to another problem: the lack of recycling on campus.

According to AISB Director Robert Brindley, around three to four years ago, a second grade class started a petition to stop the selling of plastic bottles. “They did a presentation to the upper school kids and then [were upset when] nothing happened,” he says. His response was that this is part of the “action” in CAS, and that students should be the ones responsible for leading the change. “I could stop it tomorrow,” he adds. “But the whole point is to empower kids to have a voice and to do something meaningful.”

This time, with students leading the initiative, the Eco Council has collected more than 200 signatures to petition against the sale of plastic. After all signatures are collected, Brindley has to approve it, then the students will need to convince the cafeteria to break its contract with water company Aqua Carpatica (or at least change from plastic bottles to glass).

According to Siekierski, “The cafeteria wants to be on good terms with the school, so if the school says no plastic bottles, the cafeteria should really stop it.”

The good news is the cafeteria owner has actually been thinking about this for a while now. “We are willing to stop the selling of plastic bottles and start selling reusable ones at the cafe and senior lounge,” says Florin Balu, the owner of Stradale Carnivale.

As so many people rely on the plastic bottles at the cafe for their daily water supply, this change might be inconvenient at first; however, as Siekierski puts it, “Environmental problems are so pressing that people need to realize that sometimes we have to move away from our comfort zones, and in this case, of plastic bottles. It’s really not such a big deal.”

Momentum is building behind the petition. On April 8th, the Greening Diplomacy Initiative of the U.S. State Department spoke with members of the Eco Council, along with staff members. The American government gave suggestions to reduce waste at AISB, and it’s safe to say that this could be the last year that plastic bottles are a common sight around the school.

Get Ready to Rock in the Park