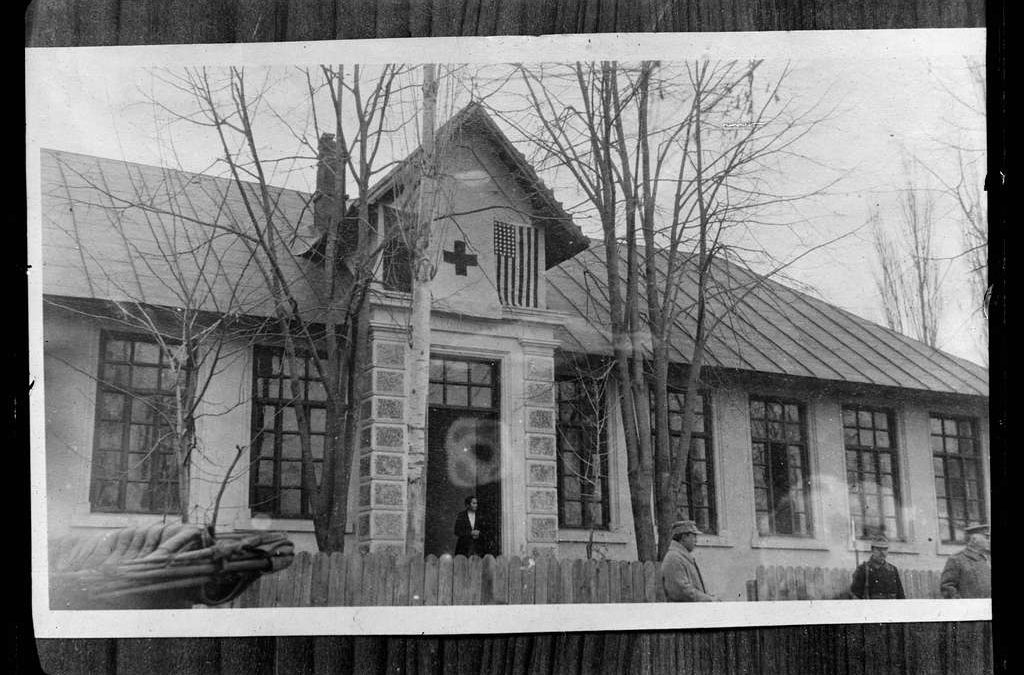 A picture of American Red Cross Orphanage in Romania; free image from GetArchive.

March 1990, Cighid Orphanage in Romania. A squeaking wood door opens to a dark room with no source of natural light. Inside, in only a few squared meters of space, a dozen of small children are folded up on rotting bed frames with no mattresses. They look like soulless ghosts, their humanity taken away.

They are the silent victims of the country’s former dictator, Nicolae Ceaușescu, and his oppressive communist regime.

This scene is part of a documentary realized three months after the fall of communism by Der Spiegel. The German media company was the first to expose the mistreatment of orphans in Romania. Analyzing the situation, Ionut Jugureanu, sociologist and executive director of the Parada Foundation, does not hesitate to use strong words: “The images are shocking, but it really captures reality without any filter as the conditions of the orphanages at the time did largely resemble those of extermination camps.”

Ceaușescu: The Roots of the Evil

At the height of its glory, the communist dictatorship voted a natality law in 1977, making contraception and abortion illegal and punishable by 5-7 years in prison. This was the result of Ceaușescu’s belief that a populated nation equalled a strong nation.

However, as Jugureanu explains, this had a negative impact as it left children abandoned. “There were generations of undesired children, notably in the poorest families, as they didn’t have the resources to take care of their children so they gave them to the state. The conditions in the orphanages became especially disastrous in the late 1980’s when the rule of communism was on the decline.”

It is estimated that at the time, around 100,000 to 200,000 children lived in these institutions, which should have been deemed inhabitable. “Nothing was done to improve the situation apart from international media and NGOs who came to help,” declares Jugureanu. “This led to children escaping them and created the phenomenon of what we know today as ‘street children.’ They would take the train (from different regions of Romania) and step off at the last station which was Gara de Nord in Bucharest.”

The Evolution of the Problem

These children, who escaped after 1989, grew up and became parents. And many of their children now live on the streets. “Today, this is the most predominant category of street children in Romania,” says Jugureanu.

Added onto that, drug usage became a growing issue. “Street children historically have the habit of sniffing glue. It’s the drug of the poor,” Jugureanu explains. “After 2007, when Romania joined the EU, hard drugs also made their introduction as Romania became a target for drug dealers while it was before only a country of transit. Of course the population of the streets were the most affected by that.”

An example of this was seen with the “sewer children,” those who find refuge in the water channels beneath Bucharest. As Jugureanu explains, when the “runaway” children arrived to this city, they found adults in the sewers. Some were good, and welcomed the lost, abandoned kids. Others, unfortunately were not, and cause even more physical and psychological harm.

A group near Gara du Nord who fit in the second category had become a center of drug trade. The police had a repressive approach; a raid happened and arrests were made. For Jugureanu ,“It is not the police that was needed there, it’s the intervention of social workers.”

Child Abandonment Culture and Lack of Support From the Government

Even with the decrease in birth rates, a culture of child abandonment still resides in Romania. “There are still between 8,000 and 10,000 children who are abandoned each year,” remarks Jugureanu. “They are families who can’t find a solution.”

Robert Ion, Fundraising and Communication Director of Hope and Homes Romania, adds, “The main cause for institutionalization in Romania is poverty. The typical child that you will find today in orphanages is the 5th or 6th child of a poor family in a rural area.”

The state has its share of the blame, as Ion points out: “In Romania, we have a law that says families should be supported; but actually, there is no budget allocated for that. There is a discrepancy between what should be happening and what is actually happening. In western countries, families are being supported and through proper services, so that they don’t end up abandoning their children.”

Jugureanu agrees. “There is the absence of family planning and social aid to help these poor families to raise their child in a correct way.” From Jugureanu’s point of view, the entrance of Romania into the European Union didn’t change anything for the better, as the government still rarely gives public subsidies to NGOs; and if they do, it’s a pathetic amount.

The Rise of Romanian NGOs: Insight from ‘Hope and Homes’ and ‘Parada Foundation’

Ionut Jugureanu and Robert Ion are respectively part of the Parada Foundation and Hope and Homes Romania, two associations fighting for the rights of these children and trying to give them a second chance in life.

In 1996, a Franco-Algerian called Miloud Oukili tried to communicate with the street children of Romania using a “social circus” (jugglers, magicians, mimes, etc…). A large Italian company saw value in this and funded Oukili, helping him create the Parada Foundation—along with a community center with structured social interventions, along with a mobile caravan with a team of social workers, medical and psychological assistants.

Today, the association still provides the day center, which contains the most basic things like resources for personal hygiene. “People can come to shower and clean their clothes,” Jugureanu describes. “We also try to collect some new clothes for them. We also created programs for reintegration and re-socialization of children into society with programs like ‘Second Chance,’ led by the ministry of education, which gives an opportunity of studies for adults who missed their school years.”

To summarize, “We work with the failures of the child protection system. This means that the conditions in the institutes or the social aids to the families were not sufficient,” says Jugureanu.

Hope and Homes was created by Mark Cook, a British Army captain who had rebuilt a bombed orphanage in Yugoslavia and had been disappointed when he came years later and saw children were not happy. As Robert Ion states, their mission aims to do essentially two things: end the institutionalization of children and to stop the separation of children from their family by helping vulnerable families.

“In 1990, there was an estimate that about 100,000 children were institutionalized,” declares Ion. “At this point, there are 4,400 still institutionalized, in about 130 placement centers. Us Hope and Homes, we have closed 60 orphanages to date and we have helped about 60,000 children to have better lives, in 22 years of existence.”

Once they have closed down an orphanage, Hope and Homes has a process to relocate the children. “The first thing we try to do is to reunite as many children with their families as we can, in which case we are offering financial support and counseling to those children and their families. If for some reason we cannot do that, we try to place children with foster parents. Social and professional integration of young adults is the second option. If for some reason we cannot do any of the above, we build small group family homes.”

The association insists on trying to create a sense of “normalcy.” Compared to orphanages, which have 40 to 60 children in dorms, these small group family homes welcome a maximum of 12, and is kept as “anonymous” as possible.

Perhaps surprisingly, the government does financially support Hope and Homes, paying the salaries of the social workers and maintenance of the house (which Hope for Homes paid for, of out-of-pocket ).

“There have been many things that the state has done to improve the care of those children, it is not like they were completely absent,” declares Ion. “They also have allowed us, private NGOs, to help close down orphanages.”

For him, that is the “first step”: to recognize the work of NGOs and acknowledge that it is helping. However, “One of the things that [the government] is not doing, that is one of the minuses, is that they allow the existence of big orphanages. Some progress has been made, but there is room for improvement.”

The Impact of Covid-19

Covid-19 impacted everybody, but especially those in situations of precarity. Therefore, many of these NGOs have been heavily affected— both financially and in their operations.

“During the pandemic, we suffered a lot, as private funds were decreased,” says Jugureanu. “But we did manage to sign a partnership with not the government but the mayor of Bucharest to create a soup kitchen.”

These food centers are one of the few positive outcomes for Romanians living on the street, Jugureanu explains. “Before the pandemic, some of these people could assure their own survival with the informal economy; but with lockdown, these people didn’t have any way of making money anymore. So they were dependent on associations which themselves had their budget cut.”

Additionally, Covid restrictions and school closures was detrimental to the mental health of the children in orphanages. “We couldn’t be as present in their lives as we don’t want to expose these children to Covid-19,” says Ion. “They couldn’t attend after school programs for example. They don’t have access to their own tablets or computers, so online education is very hard to achieve.”

In order to solve the lingering problems of Romania’s orphanages and street children, the government has to make more of an effort.

For Jugureanu, the first step is employing sexual education in schools. “A lot of families have countered this, as they thought it meant their children would learn how to make love…also the Orthodox church weighed a lot in the decision.” At the very least, Jugureanu says there needs to be more access to contraception and abortion, “which is a luxury that many can’t afford today. There’s education work to be done.”

Secondly, for Jugureanu, families in poverty should be supported. “Financial arrangements have to be found to create services and support to benefit the poor families. There also needs to be a liberalization of adoption. Baroness Nicholson of the European Parliament decided to suspend the program of adoption accusing shenanigans (in 2001).  However, this condemned some children who were in orphanages to grow up without any families.”

Similarly, Ion proposes a reform of ways in which families are helped, “so that the dissolution of these families does not happen anymore. “Otherwise, we will continue to push children into abandonment.”

Thank you to Ionut Jugureanu and Robert Ion for their participation. *Quotes from Jugureanu were translated from French, with his permission.

5 New LGBTQ+ Books to Check Out for AISB's Ally Week

A Look at AISB’s Most Interesting Flex Time Activities