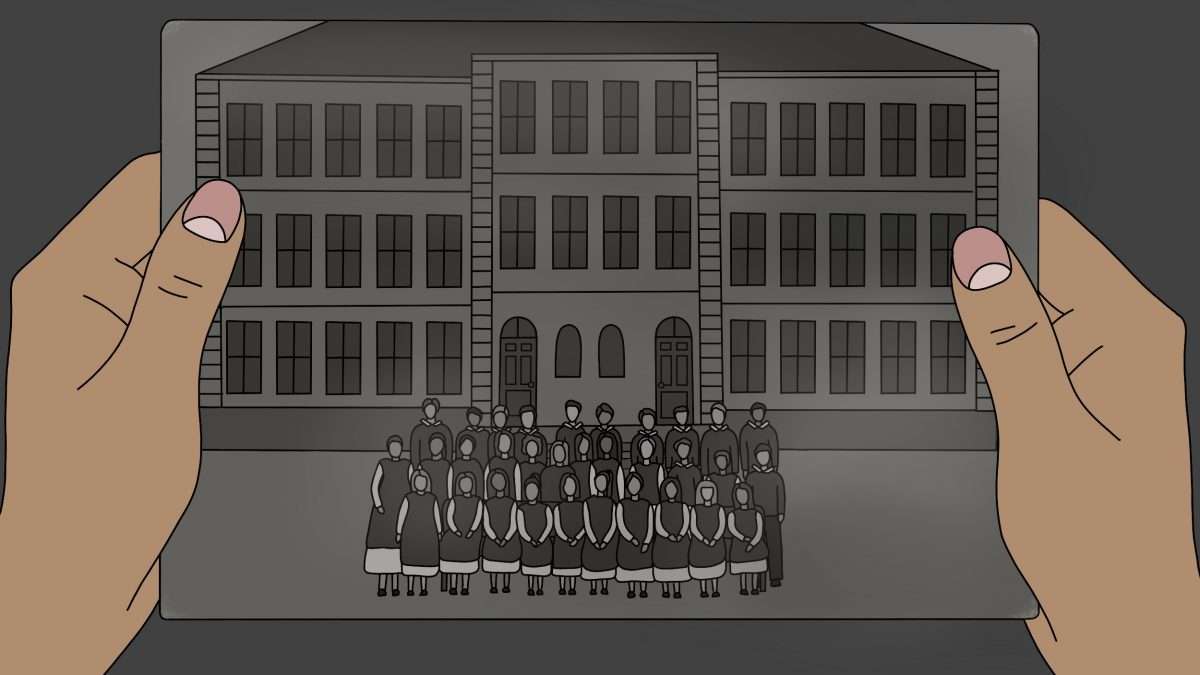 In 1966, Romania’s communist party banned the use of birth control and abortions with the intent to build a larger nation. This ban inevitably led to approximately 200,000 children being raised in only 700 orphanages that, for the most part, crumbled apart or decayed as the years passed.

The immensity of orphans had reached a stage where it was unattainable for them to be properly taken care of, resulting in violence, abuse and neglect.

Although the orphanages have been forgotten over the years, the people who once lived in them have not vanished and still live with the consequences of the mistreatment they received.

A childhood spent in silence

Many former orphans are reluctant to share what they endured during their time in these institutions, given the trauma they’ve experienced. This was exactly how Ilinca* felt when we interviewed her through Zoom. We met Ilinca through the Parada Foundation, who put us in contact with her when we showed interest in learning about these stories. She had spent her entire life up to her 18th birthday in an orphanage.

Shortly after being born in April of 1984, Ilinca was abandoned by her birth parents at only three weeks old. Living paycheck to paycheck, her mother and father could not afford the cost of having a child— a common situation during communist times.

Ilinca was allocated to an all girls orphanage in Bucharest, named Casa 4, where she says she endured great amounts of physical and mental abuse from the orphanage’s caretakers. “Any minor action could result in physical repercussions,” she explains, “which over the years caused me to have epilepsy and lupus.”

At a young age Ilinca had seen things no child should ever see, and she “bottled them up” over time, as she had no one to discuss them with. The abuse suffered within the orphanage was meant to be kept a secret and the children were threatened that if they did speak up, the consequences would be severe.

Casa 4’s rooms overflowed with young children at all hours of the day. Ilinca shared a room with eleven other girls who all slept in rusted bunk beds that screeched with the slightest of movement. Proximity was such that privacy was no longer a right but a luxury which she was not to have. At night, she could hear the cries of other orphans being beaten through the paper-thin walls.

The violence was hidden from outsiders astutely, but it never stopped. When foreigners visited the institution, the sticks used to beat the children were put out of their sight. Ilinca said that drugs were used to sedate them or to put them to sleep to ensure that they would not speak to the visitors about what the caretakers did to them.

Being an orphan affected Ilinca’s adolescence noticeably. At the school she attended, she was constantly excluded and repeatedly bullied by her classmates for things she was not responsible for. With every comment, her self esteem was deteriorating. The other students were oblivious to the suffering she was going through at what was supposed to be her ‘home,’ and they only worsened the situation.

Luckly in 1999, when Ilinca was fifteen, she came across the Parada Foundation, a non-profit organization whose aim is to support homeless children. Volunteers visited the orphanage during the evenings and allowed the kids to partake in recreational activities, like circus lessons which Ilinca took. Here, she found refuge and even if it was only during the afternoons, the activities took her mind off what she was going through. “Parada saved me; I wouldn’t be here without them,” she says.

When our interview with Ilinca finished, we (the writers) stared at each other through the Zoom screen in silence. Ilinca had shared some of her most traumatic experiences like an open book and let us into what it was like to be an orphan during the communist era. Almost immediately, we knew that there were more stories out there to be told and searched for a different perspective of the corrupt orphanage system.

An adolescence no one should have to endure

It seems that, unfortunately, adoption doesn’t always equal a trouble-free life. Larisa is a 25-year-old living in the city of Iași. She was adopted at three and began being trafficked at 15.

Larisa was abandoned by her parents at a very young age. She spent the first years of her childhood in an orphanage, then lived the next decade like any other child: worry-free and happy, with her adoptive family. Larisa was a star student, keen on learning from a young age and never missing the chance to participate in academic competitions and olympiads.

At 14, Larisa’s father was imprisoned, and her life was turned upside down. She watched as her family fell apart, piece by piece, shattering like panes of glass. Her mom started abusing alcohol, often lashing out at Larisa and even kicking her out of the house. She and her grandmother were often locked out of the apartment, waiting in the stairwell, with nowhere to go until Larisa’s mother would let them back in.

However, the abuse only worsened once her father returned from prison. Having once taught Larisa about the importance of sticking up for herself and never accepting disrespect from others, he started abusing her. During this time, she continued to live in her childhood home, with her parents and grandmother. She ran away on multiple occasions and sought help from the people around her. Ultimately, in a moment of complete helplessness, she went down to the police station, scared for what her life was going to become.

Walking into the local police station, Larisa reported her dad for sexually and physically abusing her. Determined to turn her life around and seek help, she told her story to a police officer, and brought in video evidence of the abuse. As soon as she finished talking, the police officer called her dad and notified him of the accusations Larisa had made. He then destroyed the evidence she had brought in. Larisa explains with a bitter tone that she later found out the police officer was her father’s good friend.

What followed was almost a decade of being trafficked, abused and silenced. After that night at the police station, Larisa was sold to her first trafficker, Banderas.

“They had looked for any possible way to get rid of me, says Larisa. “It was very bad for them that what was happening to me was known to the entire neighborhood. It was risky.”

Banderas was a name that came up many times throughout the interview; his shadow still haunts Larisa. But something to understand about the sticky web of trafficking is that it’s all connected. Even once Larisa was finally free from Banderas’ tight, cruel grip, she quickly found out that she had been ‘sold’ to someone else.

Throughout her teenage years, she was kidnapped and trafficked in Germany, in a highly organized trafficking operation. It has been reported that trafficked victims from Romania are often taken across borders, the top destinations being the UK, Germany, Italy, Spain and Sweden. Larisa was a victim of one of these operations, and describes the hundreds of girls who had fallen prey to this form of cross-border trafficking. She escaped in a moment of great astuteness and with a glimmer of luck on her side.

Back in Romania, she thought all was well and began living a new life, putting the past behind her. Only a few years later, she was kidnapped and trafficked again, this time being taken away to Italy. Thankfully she escaped, but still had to fight for her freedom, in her home of Iași.

We are taught from a young age that authorities will protect us whenever we have been the victims of injustice, let alone crimes. So, what could have been going through the young girls’ minds when they realized that this wasn’t the case? Both of them were failed by corrupt systems— whether it was being abused in an orphanage or being told that their trauma didn’t actually happen.

The indifferent and unjust way these issues are treated cannot be brushed under the rug any longer. Ilinca and Larisa’s stories are only an ounce of the many examples of the deeply-rooted corruption in Romanian systems.

The flawed reaction to the girls’ experiences stems from the way they were handled at a legal level. When Larisa first attempted to report her abuse, she was shunned away, being told she would need her mother present in order to file the accusations. However, since her mother was part of the problem, expecting her support of the police report was unfeasible.

“No teenager runs away from home because they are being treated well, Larisa explains. “This is something many choose not to understand.”

Human trafficking continues to be a prevalent issue in this country. In the 2021 US Department’s of State Report on human trafficking in Romania, it was clearly stated that the country fails to meet the minimum international standards towards the elimination of trafficking. Meanwhile, the funding allocated towards social assistance to victims continues to be insufficient. This has left victims without the necessary resources and put them at risk of re-trafficking.

Asking Larisa why nothing has changed, she looks straight at the camera, shaking her head and says: “Statul stă.” —“The state stays put.”

A note from the authors:

The system failed these women who were once young girls that needed protection. They were ignored and left helpless to deal with this trauma by themselves. The inner strength and positive attitude that both women had in order to build a better life is undeniable.

Despite the passing of time, the situation in many orphanages throughout Romania has only been subject to little change. “This abusive behavior changed in 1999,” says Ilinca. The blunt and evident physical abuse switched to a hidden and secretive one, as the caretakers have to protect their jobs.

Nonetheless, hope is not lost. There are people who are actively fighting to better the situation of children in similar situations as Ilinca and Larisa. Even though the problem seems daunting there is a light at the end of the tunnel.

*One of the people interviewed requested to remain anonymous which is why we will refer to her with the name Ilinca.

For more information and resources on this issue:

The Evolution of Romania’s Orphanages – The Bite

Can an unloved child learn to love? – The Atlantic

How Can AISB become more Eco-Friendly? A Q&A with Cafeteria Manager Octavian Stoica

Ramadan: “It will be a test but the peace you get is beautiful”