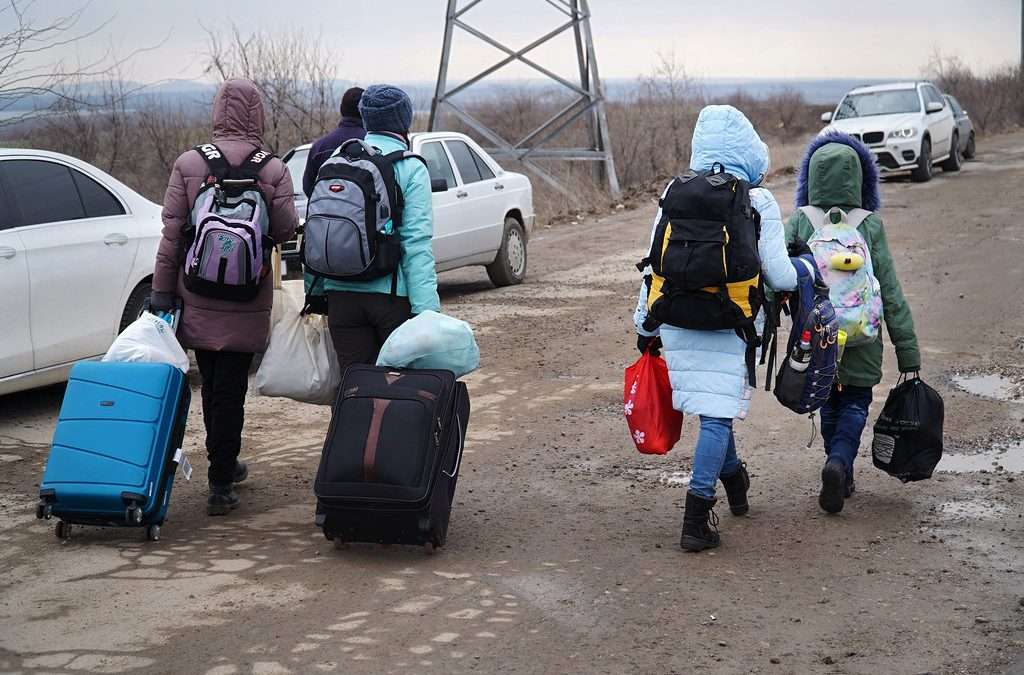 When Russia invaded Ukraine on the 24th of February, millions of people prepared to flee their homes and expose themselves to a very real risk in the process: becoming victims of human trafficking.

Unfortunately, this is a common concern any time there is a refugee crisis—the main reason being that people lack access to basic resources and livelihood opportunities, hence they become easy targets for traffickers, who prey on the precariousness of their situation to exploit them.

Following Ukrainian government regulations, men above 18 were (and still are) not allowed to leave the country. Instead, their conscription age forced them to stay and fight for their country. Consequently, refugee centers and border crossings are full of women and children, most of them trying to travel as far west as possible.

With more than 14 million refugees having left the country as of May 25th, and the concern of refugees becoming victims of human trafficking based on previous trends, we decided to investigate what’s happening here in Romania.

In war, there are multiple factors that contribute to the susceptibility of a person to human trafficking. Among them lay amplified social and economic vulnerability, the excuse to avoid the law, and forced displacement – which have been seen to occur in Ukraine with the fall of the hrivniya, Ukraine’s currency.

Between February 24th and March 17th, UNICEF reported that over 500 unaccompanied children were found crossing into the Romanian border. Especially without the company of a trusted adult, these children become easy targets for traffickers. Vulnerable children are targeted because it is easy to isolate them from potential support, and they can be used to befriend and recruit other victims.

Human trafficking involves a multitude of protection issues in what has been widely regarded as Europe’s biggest refugee crisis since World War II.

Shawn Kohl, the regional director of the International Justice Mission (IJM) for Central and Eastern Europe, has cited child labour laws, exploitation, and trafficking among these problems—in addition to the fact that none of the implicated countries had adequate protection in place.

“No one expected this refugee crisis and governments were unprepared, so there was a heavy reliance and need for volunteers,” says Kohl.

IJM is an organization working with 23 different countries to support governments and partners with human trafficking cases. Their role is to ensure victims receive the services they need for safeguarding and to make sure that the charges traffickers are brought in on stick.

In this case, it is important to note that human trafficking does not only reference sex trafficking. While that is undeniably a major piece of it, human trafficking is the coercion into forced labour (including sex work, but physical labour as well) through the means of violence, untruthful promises, and manipulation, as mentioned by the United States’ Blue Campaign.

In Romania, human trafficking mainly manifests in modern-day slavery and sexual exploitation. And, tragically, Romania serves as a transfer center, with victims being trafficked in and out of the country in limbo.

When asked if human trafficking had increased since the start of the war, Kohl responded very intentionally: referring to legal, reported cases of trafficking. And, at the time of our interview, there had yet to be a single closed report.

This may sound like the opposite of what people are expecting to hear. But this is mostly due to the fact our preconceived notions of what human trafficking looks like, is much different than reality.

“It’s not like Taken (the film),” says Kohl. “It takes a lot of time to understand trafficking cases.”

Kohl explains this is because the trafficking process moves a lot slower than one might think. Most often, it begins as a “job opportunity” for people desperate to have a stream of income, that gradually shifts into forced labour or sexual exploitation. “It’s not a sexy story like in the movies,” he says.

Among the most at-risk people are day laborers and people with limited means, who have settled down in Romania to remain in close distance with their relatives who are fighting in Ukraine. While they cross the border with one or two months’ pay saved up, money is bound to run out and they are likely to fall for traffickers’ schemes.

“They believe anything because they have hope. How long do you want to stay in a refugee camp with 2,000 people?  They become dependent on the people they’re staying with” — Shawn Kohl.

This dependency, and more so, inability to create their own stream of income, makes the refugees vulnerable to any schemes that come with the promise of money.

With most only taking a month’s salary with them across the border, their money runs out quickly. And, without this money (or jobs to provide a feeling of purpose), desperation and panic are common emotions.

Will the Refugee Crisis become a Human Trafficking Crisis?

While at the time of our interview there were no legally-documented trafficking cases, Kohl explains that there are certain realities that we must keep in mind during this growing refugee crisis.

It is known for a fact that within Romania, organized crime families exist, and that the country is part of the Eastern Europe border route used by criminal networks. A similar situation is shared by Poland, where almost 3.8 million  Ukrainian refugees have found themselves since the start of the war (1,512,192 of them have since returned).

Kohl also shares that the Organization for Security and Co-operation in Europe (OSCE) has seen increased searches for “Ukrainian sex workers,” and they are preparing for the worst.

These realities exist when, unfortunately, much of the world has moved on to other crises—forgetting that many of these refugees are now living in countries like Romania, away from their families, continuing to live in shelters.  Many fled Ukraine without necessary documents, such as biometric passports, and aren’t able to travel further—nor get legal work.

Kohl says that until these people are able to live more independent lives, safeguarding by NGOs and governments (working together) must continue to take place. He also explains that businesses need to hire these refugees to allow them to become self-sufficient until they can hopefully return home.

“When people get out of dependency, their risk of danger goes down and they can transition to an independent life,” explains Kohl.

He also suggests donating to smaller NGOs such as the Jesuit Refugee Service (JRS), Fight for Freedom, or IJM, as they are on the ground in Romania. “[They] are doing the work when people are starting to forget that we still have a very real refugee crisis on our hands.