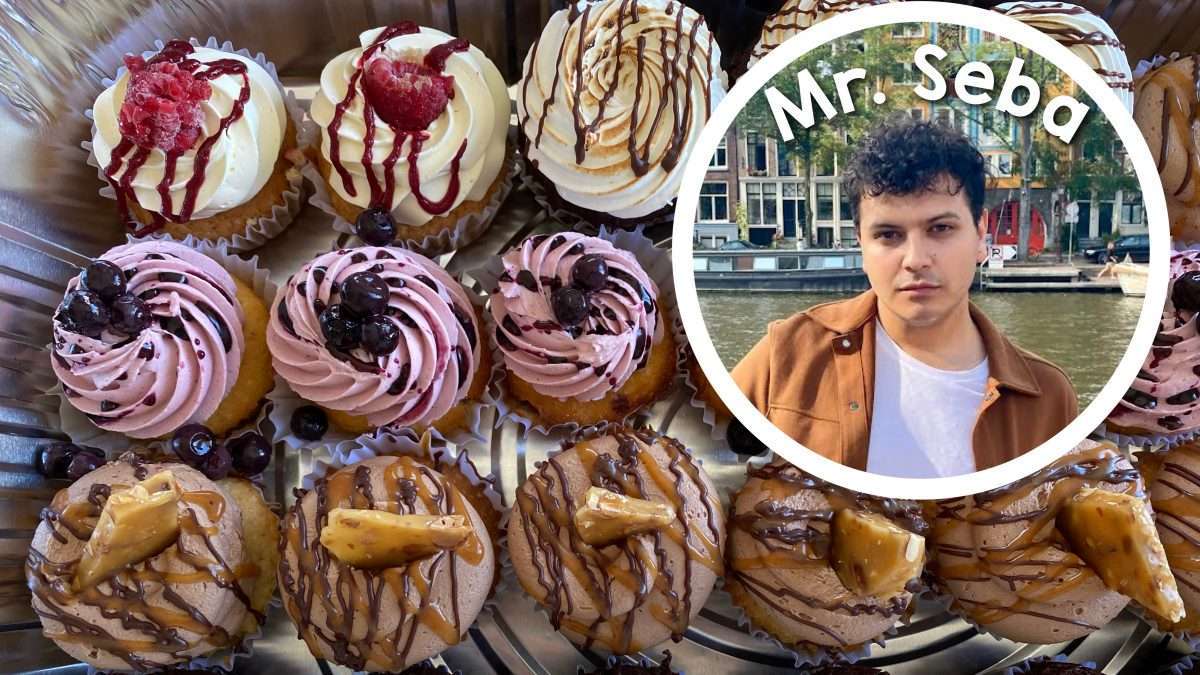 Despite starting this year off in-person, you still might not have gotten to know our wonderful new EAL teacher, Sebastian Olivares (known to students as “Mr. Seba”).

He comes to AISB from Chile, where he grew up learning to make authentic Chilean baked goods, and developed a deep passion for baking. He shares this passion with us here, along with his recipes for chocolate and vanilla cupcakes.

A Food & Family-Filled Past

Olivares grew up in the peaceful beach town of San Antonio, Chile, near one of the busiest and largest ports on the west coast of South America. He spent his weekdays at school and his afternoons taking care of his two brothers. Weekends were reserved for family and food.

Every Sunday, Olivares went to his grandparents’ house, along with his with nine aunts and uncles and 36 cousins. The day would start with an early morning walk to the market, followed by hours of cooking in the kitchen. The process of creating lunch was more than just food; it was about being together, as a family.

“I remember being excited, not only because it was family time, but also because I really enjoyed spending time with my grandma,” says Olivares.

Some time after lunch, the family would have Onces, a Chilean tradition where family and loved ones get together and talk over something sweet, fruity, or even savory. And this is how Olivares’ passion for baking bloomed.

Throughout his childhood, Olivares’ aunt baked one of the country’s most beloved snack for onces: calzones rotos, or “broken underwear.” She would sell these authentic pastries, topped with powdered sugar, on the streets, and as a child, Olivares played with the dough. Later on, he would make and sell them himself.

Olivares remembers the first time he baked something he truly loved: cheese empanadas. Assembling them with his small, tiny hands, he passed the dough to his mom to drop in the fryer (it would have been too dangerous for a child to do). He recalls his parents having them for breakfast the next day, staring back and forth at each other simply because they were just so good.

“A crispy shell, breaking down in your mouth, and suddenly an explosion of the cheese filling…they were delicious,” he says.

Developing His Newfound Interest in Cupcakes

From what started off as a way to connect to his family, Olivares found himself in need of financial reassurance his first year of college, and decided selling food was a good option.

But he didn’t want to sell the typical Chilean pastries you could get anywhere. He wanted to sell something that his peers (who were studying English and who were very into American culture) would want. He started to research, and found out about cupcakes, which at the time were not popular at all in Chile.

Slowly, the cupcakes became popular within the university; and eventually people sought him out to bake for birthday parties and special occasions.

Later on, Olivares took an online course from Cornell University to learn about food science, in order to create his own recipes. This allowed Olivares to be more creative in the kitchen—which resulted in an online storefront, where he was getting 100 orders per month.

And while this was exciting, Olivares says he never really wanted to turn this hobby and passion into something professional.

“I got so stressed and all the passion that I had for it and love I had for baking just crumbled into pieces.”

During his many years of baking expertise, Olivares finally perfected his two basic recipes: a chocolate cupcake and a vanilla cupcake, which he plays around with, adding new flavors to create new combinations.

Olivares believes that there are two necessary parts to creating the ultimate cupcake. The first is the baker’s mindset, and their emotional connection to the experience. He explains that baking could be an opportunity to better connect to someone, something, or even to just allow yourself to have an enjoyable experience. “Allow the smell of the vanilla scent to remind you of a loved one,” he encourages.

For Olivares, baking is an outlet to remind him of his family: his aunt, his grandma, his brothers, and everyone he was surrounded by as a child.

“I do everything in a way that resembles something from my past,” he says.

The second necessary part for creating the ultimate cupcake is using the correct method, which for Olivares, is different for chocolate and vanilla sponge. For his chocolate cake, he prefers the traditional method of mixing dry and wet ingredients separately. But for the vanilla, the all-in-one method, where you combine everything together at the same time, is best. he just warns not to over-beat the batter, which results in very large, overly airy cupcakes. For Olivares, 58 seconds of mixing is ideal.

The perfect mixture should look like vanilla ice cream, says Olivares. “The secret to cupcakes is texture; it’s a whole experience.”

Ideally, Olivares says that bakers would benefit from getting professional equipment, if possible. This allows you to control the amount of air that goes into the batter; which, with a hand mixer, you would not be able to do.

“Then, once bakers perfect the cupcake sponge, they can start having fun with frosting and filling flavors to spice things up.”

Thank you, Mr. Seba, for sharing your stories and recipes! We hope to taste your cupcakes again one day soon.