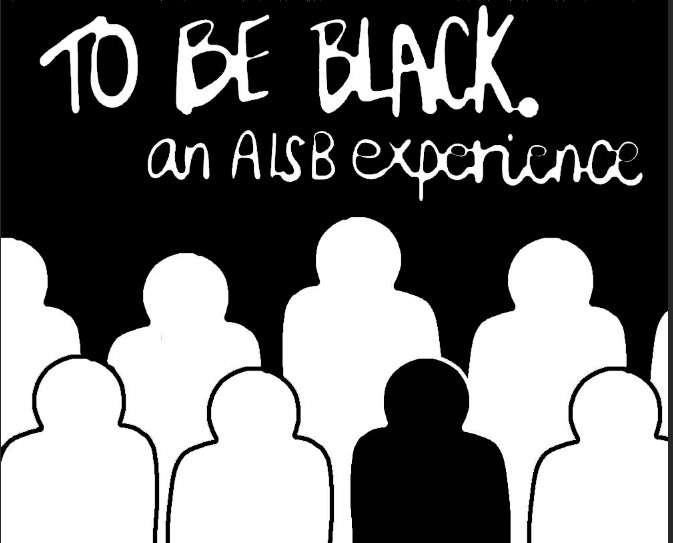 “Write an article for Black History Month.” This was my assignment. Pretty straight forward, really—a first-person narrative of what it’s like to be the only African American at AISB.

But we’re now well into March and I’m just now finishing it. Writing this article for this community was much, much harder than I could’ve ever imagined.

Coming to Bucharest in my final year of school has been quite an experience. For starters, I went from a public school in Florida to the Diploma Program. I’ve had to take mostly 11th grade classes as a senior. And, the most jarring: I feel like a minority.

Don’t get me wrong, I’ve been a minority before. Technically, all people of African descent are minorities in America, the place where I’ve lived most of my life. Yet, this is the first time I’ve been aware of it. There are so few black students at AISB in fact, that by next year, there’s a good chance that no one in the secondary will have black skin.

Should that not be scary?

Is it weird for me that it is?

It’s not that I’m scared to be the only black person at the school; that’s not really the issue. It’s that there’s part of black culture that has spread throughout the student population that reeks of ignorance. I hear the N-word on a daily basis; I see gang signs being tossed around as if they hold no other significance than a flick of the wrist.

Students say it’s okay because it’s part of rap culture, which most of the student body listens to; but it’s not. I hear the whispers of others making fun of my skin tone, yet I’m mocked if I wear a chain. I’m stared at by others and confronted by questions such as if I am related to another dark-skinned person in this community because “we look alike.”

I am either too black or not black enough; yet no matter what, I am in the wrong. The stares weigh over me like a thick smog, the whispers cloud my hearing, and on this campus I am left an outcast. Isolated. Alone.

The first time I heard the N-word at AISB was shortly after I arrived. It was after school in the secondary building’s upstairs lobby. I was talking to two other classmates about the rigors of the DP. Across from us, a group of peers played chess at one of the tables. Paying them no attention, I began to tap away at my computer’s keyboard.

I don’t know what caused it, but there seemed to be a move made that provoked one of the players to voice his frustration out loud, causing him to let the word slip from his mouth.

We all knew it was intended for his friend, but I couldn’t stop the way my stomach dropped at hearing such a word used. They even had the audacity to freeze afterward; and from my peripheral, I saw them turn their heads to look at me and gauge my reaction, his friend chiding him in a rushed whisper. I knew it was wrong, they knew it was wrong, yet the weight of their stares sewed my mouth shut and glued my eyes to the computer screen.

So he said it again, in a different sentence, but a little louder as if testing the waters once more, and when my body grew taut and my mouth refused to open, they giggled. And repeated it another time, with renewed strength, laughter almost euphoric as I sat frozen in place, unable to continue typing and forcing my finger to drag across the mousepad so it looked like I was doing something. Anything.

I felt sick to my stomach. To continue breathing felt like a chore. To sit there and not cry was almost unbearable.

This blatant display of racism came from the same person who, earlier in the year, had made me do a double-take when I heard soul music coming from his phone’s speakers.

I remember looking up from my laptop in shock, nodding along to the slow and sensual beat of the tune as the artist serenaded on. For a moment, I was transported to Chicago, to my grandma’s house, as she blasted music from a time before. Her house so full of life, full of loved ones, listening to our category of music—music that’s been bred throughout our hardships and pain, our suffering and accomplishments, the type of entertainment meant to keep us going when the world told us to stop.

I had looked up at this boy, jarred and even at a loss of words for a moment, because in the same place where I was facing extinction, I was also seeing my culture honored. He sung along so easily, voice heartfelt and a small smile splitting his face as if he understood just what this music meant to me—like it held the same importance to him as it did for me. I had felt light and giddy. I had felt more at home in AISB than I ever had.

Now, I just feel stupid for ever thinking we had something in common. For feeling included.

Since the chess incident, I’ve heard the N-word more times than I can count. In fact, calling each other such a word has become commonplace in the presence of the secondary lobby. This by no means, makes it hurt any less.

This word, each letter claiming its own heaviness, is tossed around as if it weighs no less than a feather by the ones who use it. Yet for black people, the people who it applies to, it feels like a bag of stones being tossed directly at us and we cannot move out the way.

Brown, my last name, is the fourth most popular surname in the US. It was given to my ancestors by white slave owners who decided that they weren’t worthy of being called anything other than the color of their skin. So they called us Brown—the color of dirt. And, they called us niggers—the ultimate word to convey the purest sense of hatred.

My last name is Brown because my ancestors suffered as no one ever deserves to. They were tortured and traumatized and raped and much, much more. No protest was allowed because of the color of their skin, and every crime committed against them was justified by this single word.

Imagine having to go through life with this knowledge, knowing your name is gone and you have this sense of diaspora engraved in your blood, and you find yourself surrounded by peers who praise the actions of the past relentlessly throughout their day by using this word, which was simply an excuse for all the transgressions committed against us and a form of oppression to keep us down, and practically telling you that it is deserved because they want to be cool. They want to be funny.

They want to be black.

But then, they don’t.

These students are proud of where they come from, but they also identify with “black culture,” meaning rap music, hip hop apparel and sneakers. But this is only the shiny, pretty part. They don’t identify with, nor want, the high-maintenance hair care, the nose shape, or the lips. They don’t want to fear being pulled over on the interstate, or getting reminded by parents to walk down the street without earphones so that ignoring a police officer isn’t an excuse to be shot. They don’t want to be the minority, and they definitely wouldn’t want to be called a nigger.

You can appreciate our genre, you can listen to our music, but this is no excuse to piggyback off our suffering and claim that you “get it.” You don’t, and I pray that you never have to.

The N-word is something that African Americans have carried for generations, and when we use this word in our music and to one another, it is as a form of empowerment. To remind ourselves how far we’ve come. We are no longer tossed atop one another on a ship with limited water and food. We have left those fields we were forced to maintain. We have left the whipping post we were strung to. We have left the houses we were told to clean but weren’t good enough to sleep in, to eat in, live in.

We can finally vote and read and sing and dance and play and cry and work and live our lives.

We have reclaimed that word as our own. We can use it, and white people no longer can.

When it leaves our mouths it is because we, and only we, have to power to change its connotation. When we say it, we of all people know best what it means but we refuse to let it define us. We give it new life and meaning, we grow up hearing it as an achievement. It’s used as a term of distinguishment, of endearment, and camaraderie. We use it for our brethren who have suffered no differently than we have, but also as a reminder to fight in a world that continues to punish us for the color of our skin.

My peers know the unspoken rule that they cannot say this word, yet they’ve taken it upon themselves to use it as if they feel they deserve to. Afterall, who is going to defend a culture that is not their own?

Cultural appropriation is an issue that is ignored here, yet the reality of it is everywhere. When our hairstyles that were manifested from our pain, tribulations, and cultural growth are cut and pasted on the heads of people who laugh out of ignorance. When I hear students giggle while watching a kid with a heavy Hindu accent say the N-word. Speaking in ebonics, even though they have no idea what that even is; everything is just “lit” or “cap/no cap” or “fire.”

Yet I know for a fact that if you dropped them in Southside Chicago, where my family is from, they would suddenly know better than to behave like this. They wouldn’t toss their gang signs around or speak that word… ever. And that is because they know that these things would undoubtedly be met with confrontation, and they only get away with their actions because of the lack of African presence in this community.

For months I have tried to ignore these things, to just integrate inside and out of AISB and hope it stops. But it hasn’t.

I have to be the one who speaks up. I have to make them realize what it feels like to be called the N-word as a black person. And though I was not boarded on a ship from the 1500s to the 1800s, nor did I have to fight for my rights during the 1900s, I am here in the 2000s and the trauma in my DNA still knows the meaning of those syllables.

I know this is just the beginning. There will always be people who just don’t get it. But this is the first step of many. I’m finally putting my foot down on the ground and it’s going to stay there.

This is what it means to be black.