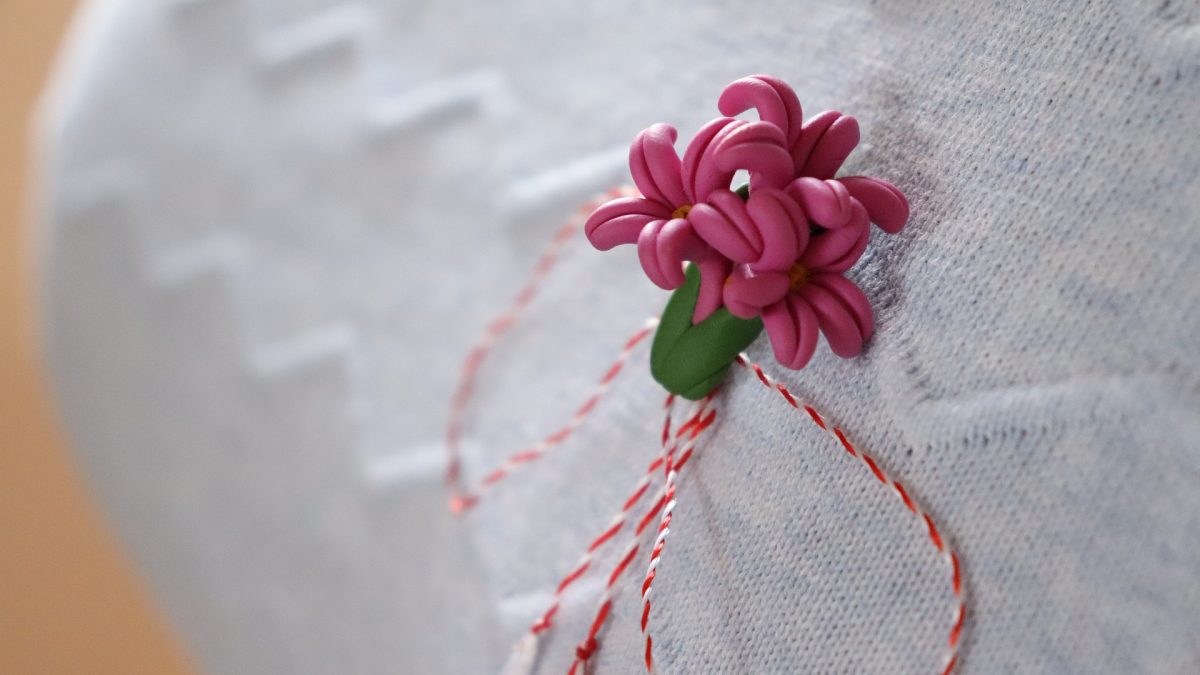 While we may be stuck at home for the next few weeks (or months?) because of COVID-19, at least spring is here! The sun is shining, birds are singing, and you can smell the fresh scent of flowers in bloom. In celebration of Romania’s most beautiful season, here are some of the best spring traditions celebrated by members of our community.

For the Romanian community, Mărțișor is always happily celebrated to welcome spring on the 1st of March, and some even call it the “Romanian Valentine’s Day.” There’s a story to this tradition: The sun came down to earth as a girl who was imprisoned by a dragon. A young handsome boy fought the dragon, leaving his blood in the snow. As the blood was spilled onto the snow, a flower called Ghiocel (snowdrop) rose from beneath the snow.

Because of this fable, bracelets made of red and white string (the color red represents the blood of the young guy, and the color white represents purity) are given to friends, and flower pendants are gifted to symbolize the start of spring.

Ninth grade student Tina says that “back in public school, boys would always buy like 20 Martisor and I would come home with a bag full of them.” Usually, you wear the bracelets for a day, or sometimes even for a week or two, but usually no more than that.

Some people give each other bracelets and pins, while others chase down a rolling cheese wheel from a hill in order to welcome spring. The Cooper’s Hill cheese rolling has been a tradition in England for the past 200 years.

The goal is quite simple: whoever manages to catch the 3–4 kilogram Double Gloucester cheese and rolls down from the hill first, gets the prize–the cheese they were chasing! It takes place on a hill near Gloucester, a city in England. Originally, the tradition was organized by and for people who live in a local village of Brockworth, but now it has become a world-known tradition in which anyone can participate.

Ninth grade student Hana has seen the festival, but hasn’t participated in one, even though she says “it’s pretty funny and amusing to watch, but I wouldn’t do it myself, though I have been wondering how they came up with such an idea.”

The event usually takes place towards the end of May between the 20th-31st May, and this year is scheduled for May 25th.

Once the Chinese farmers go out to the fields and start working, it’s a sign that spring is here. Celebrating the Chinese spring starts a bit sooner than in other cultures (late January or early February), as it coincides with Chinese New Year, also known as the Spring Festival.

The Spring Festival lasts for about 15 days and it is the grandest festival in China. Before it starts, an important tradition takes place: people place paste couplets on their doors (red signs with auspicious sayings, or their hopes/resolutions) to welcome spring.

Tenth grade student Chi shares that “in my hometown, adults would buy gifts and new clothes for children, especially new red clothes. It’s like Christmas! Also, it’s a good chance for family members to go home and stay together for a few days, and good for me to eat delicious food during the time.”

Some of the Slavic countries like Poland, Slovakia, and Czech Republic believe in the Goddess of Winter and Death called Marzanna or Morana. The Polish tradition consists of burning and drowning the “Marzanna” (a woman figure made out of straw which is wrapped in linen and beautified with ribbons and beads) who was, usually in the past, blamed for the cold winters as well as the famine and death caused during this time.

As spring approached, the villagers living in the countryside decided to create a figure of a woman on a stick. Then they would set her on fire and throw her in the nearest river/lake and watch her sail away, which would symbolize the winter “sailing” away in order for Dziewanna (also known as Zivena), a goddess of life and prosperity, to come.

This interesting tradition is celebrated on the 21st of March each year. In the past, the tradition was celebrated by the whole village, but nowadays, it is usually celebrated by kindergarteners only, who dress up in cultural costumes and go out and drown the stick figure of Marzanna.

Eighth grade student Maja celebrated this in kindergarten and remembers it as “being scary at first, but then it became fun and it was interesting to watch the figure sail away.”

When it comes to welcoming spring, some countries try to beat the Guinness record while still celebrating their own unique tradition. Cimburijada, which translates to “the festival of scrambled eggs,” is a yearly festival taking place in a town of Zenica in Bosnia on the 21st of March.

The whole town gathers together with people from other cities as well as from all around the world. The town usually uses around 1,500 eggs, which is far from Colombia’s record-holding 3,112 kg pot of scrambled eggs, made from 59,758 eggs! But maybe one day the Bosnian town will break this record.

The scrambled eggs are cooked with some milk in a huge pan and then when the cooking is done, all the people eat the eggs together, share stories and listen to Bosnian music and welcome the spring.

Tell us: How do you celebrate spring? Share in the comments below!

How the Coronavirus is Affecting the Romanian Economy

A Look at AISB’s Most Interesting Flex Time Activities