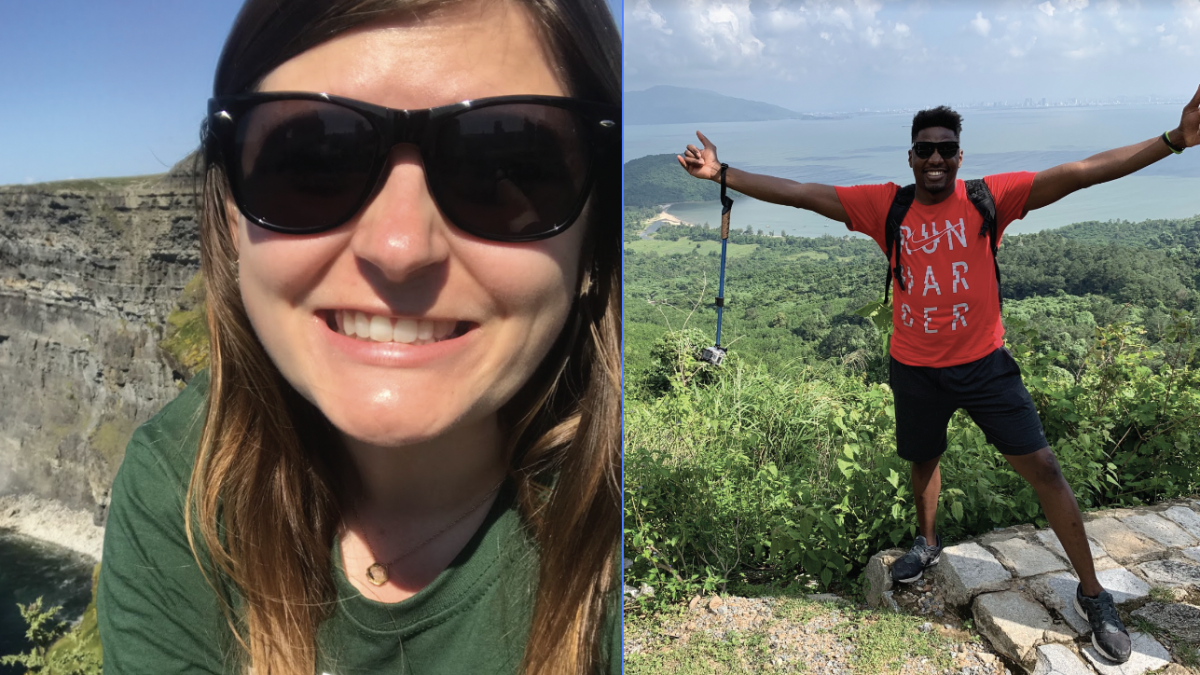 As we’re about to enter the third quarter of the 2022-2023 academic school year, we continue to transition to new schedules and adapt to new social circumstances.

However, we usually overlook the fact that it’s not only students that go through said transitions, but teachers, too. This school year, AISB welcomed 10 new Secondary teachers, recently profiled in a Q&A published on The Bite.

Curious about this question of transitions, The Bite reached out to two new teachers about their experiences moving from Ho Chi Minh City, Vietnam, to our school in Bucharest, Romania.

Originally from the United States, English and Humanities teacher Elizabeth Eckenrode recently moved from Vietnam, where she taught at an international school in Ho Chi Minh City before moving to our community at AISB.

In her previous school, Eckenrode taught EAL and language acquisition, a job and location she was very fond of. However, due to Vietnam’s strict laws regarding leaving and entering during the first two years of the COVID-19 pandemic, she decided to move on to a new adventure at the end of her previous school year.

Eckenrode’s wish to move on was greatly influenced by her desire to see her family, especially after not seeing them for two and a half years due to the pandemic.

So I finally saw my family this summer!

After her decision to leave her beloved school in Vietnam, Eckenrode began to research the next school she would teach at and the destination in which she would be doing so.

Still wishing to remain international, Eckenrode wanted to try a new destination for her next location. After a long interview process with Secondary leadership at AISB, she was offered the job.

To explain her rationale for accepting the offer, Eckenrode says, “I felt like I knew a lot about Western Europe already but Eastern Europe not so much, so I wanted to go to a place I didn’t know too much about.” She adds on that moving to Romania would be be “interesting and something different than what [she has done] before.”

Nevertheless, transitioning between the two countries was a very challenging period for Eckenrode.

First, in order to be able to travel and bring her lovely dog to Romania, she had to engage in a long process of preparing documents. This required notes from countless different veterinarians in the United States, time, and money; however, it was all worth it in the end.

Aside from the documentation process, Eckenrode also faced social and emotional challenges that come with transitioning between the two countries.

“It’s very difficult for me right now,” Eckenrode says. “I’m still used to my routine in Vietnam. I’m used to driving a motorbike — or as soon as I leave school, there are like a bunch of restaurants right outside [my apartment] building, and here you have to drive everywhere, and I don’t know the language.”

A major social challenge was that her previous school was more centrally located, with restaurants, apartments and other recreational areas around just outside the campus; this isn’t the case now at AISB, with the necessity of having to drive everywhere due to larger distances between her apartment and the center of the city.

In addition, Eckenrode had to not only adapt to a new country, but also a new campus — one much more diverse and large in size compared to her school in Vietnam.

Eckenrode notes that AISB’s 10-hectare campus is significantly larger than her previous school, and is a campus that that includes two football fields, a basketball court, a main stage theater, a “black box” theater, design center, Early Learning Center, and much more.

Additionally, Eckenrode emphasizes how the community and diversity within the student body in both schools are very different. Moving to a campus with students and staff from over 60 countries, Eckenrode hears different languages than she is used to hearing daily.

The students are very, very different, too. I’m totally used to hearing Vietnamese and Chinese, and the way that they pronounce everything, but here I hear Turkish, Romanian, Ukrainian and all of these other languages – it’s very different.

While she misses Vietnam, especially the Vietnamese cuisine and warmer temperatures during the winter, Eckenrode wishes to make sure that, ultimately, she is able to provide a classroom environment in which her students feel safe and remember that she is always there to support them.

EAL teacher Joel Krasso, originally from the U.S., has also moved from an international school in Ho Chi Minh City.

Although Krasso loved Vietnam, he decided to move to a new school because he sought professional development at a higher level. After his decision, he conducted a lot of research on AISB and decided that to accomplish his goal and further his career, our school would be the right place for him.

Like Eckenrode, Krasso went through a long interview process with Secondary and school leadership, ultimately resulting in an offer of a position at AISB. Saying “yes” to the offer was the easy part for Krasso, professionally-speaking.

However, from an emotional perspective, this move was indeed hard for Krasso. He refers to the decision regarding this move as “emotionally, the most difficult and surreal decision” that he’s ever made.

The reason for this is due to the fact that he refers to and thinks of Vietnam as his home. Regardless of the numerous times he had traveled before, leaving home behind was unmatched and a very difficult decision for him.

Krasso adds that he thinks Vietnamese and Romanian individuals share a lot of similarities. For example, Krasso says people from both nationalities are “always willing to help others” and are, overall, positive people. This has made a good impression on Krasso, especially in a country new to him.

The transition between Vietnam and Romania brought Krasso a range of emotions. He has also learned to adapt to a new environment and campus.

As of today, AISB has approximately 900 students. Krasso’s previous school, however, had significantly fewer students: around 450 students total.

According to Krasso, the low number of students in the campus corresponded to a reduced number of staff teaching in the school.

Krasso reflects on this positively, as since there wasn’t a lot of staff, the staff that was available knew each other very well and had a lot of positive interactions on a daily basis.  This led to closer bonds and friendships being formed between the coworkers.

If you are planning to thrive staying in a particular destination or school, I think the community plays a big part in it.

The community and staff are one of the aspects that Krasso appreciates the most at AISB. He especially appreciates the bonding between the staff that has been built in our school, which creates a positive environment for new staff members to thrive and be optimistic during their stay at the new school.

While he misses everything about Vietnam, Krasso makes sure to let his students know that he is always there to support and advocate for them.

All in all, transitions for teachers are challenging socially, emotionally, and logistically, and can easily compare to what it is like for students making these global leaps and bounds, too.

Best wishes to Eckenrode and Krasso on their journey in our school, and best wishes to all new staff members and students for the 2022-2023 academic school year!

Mental Illness: What do you really know?