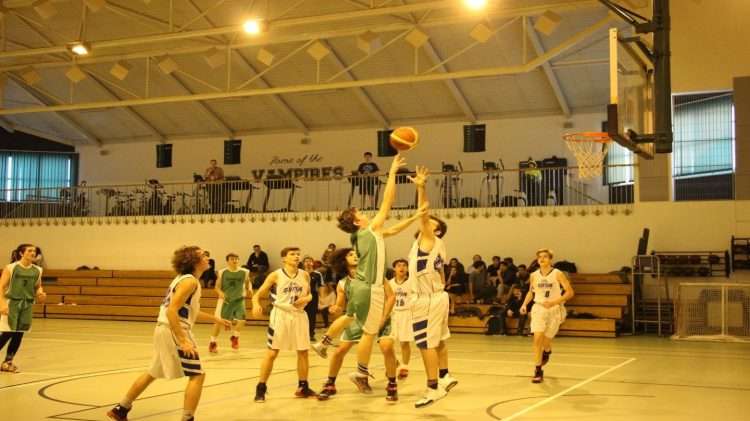 During the 2017-2018 basketball season, the AISB HS Boys Varsity team returned to the court to continue their training in order to defend their CEESA title of last year. The team has been successful ever since they joined the CEESA program and has won multiple championships and local tournaments in Romania as well, with only one defeat against a local professional club named “Slam.”

Last weekend, at the CEESA tournament, AISB’s Varsity Boys played against the teams in the CEESA association (The Moscow Penguins, The Prague Falcons, The Budapest Beavers, The Warsaw Warriors, The Istanbul Dolphins, The Kyiv Kozaks, and The Belgrade Dragons) to eventually find out the new champions of the season.

The Varsity team brought home second place last week, with The Belgrade Dragons (at their home court) taking first place by 13 points. According to Serban B., who has been a top player in the Varsity team for the past years, the team’s reason for success is the amazing coaching that has been shaping the leading players on the Varsity team as well as Junior Varsity (JV).

Both of the Vampire teams attended the CEESA tournament on March 8-10, which for Varsity boys, took place in Belgrade, and the JV boys were in Krakow. The JV team, perhaps due to the lack of experienced players who have now moved up to the Varsity team, secured fourth place out of five schools.

The Varsity girls also trained hard this season for the CEESA tournament that took place in Kyiv, Ukraine. The girls’ team has achieved impressive results in CEESA tournaments in the past and won second place in the final game against The Warsaw Warriors with a difference of 26 points.

According to co-captain Milana I., who has been playing for 6 years in the team, it was a “new and interesting experience’’ due to the age differences in the team, which is a result of freshmen girls who joined this year. She has also mentioned that the team’s reason for success this season is the connection between the coaches and players, saying that it really helped to bring the team closer together and play at a higher level.

The JV girls, whose games were hosted here at AISB, had been struggling this season to win local matches, but did very well in the CEESA games, placing second. The Middle School Girls also did exceptionally well and placed third in the HS Girls JV tournaments.

AISB’s Secondary Athletics & Activities Director David Hughes expressed his feelings about the tournaments, saying,”I am so proud of everyone who has represented the Vampires this year! From speaking with athletes, it seemed that everyone had a lot of fun. While it was unfortunate that we couldn’t convert one of the second place finishes into a championship, I think that the fact we had teams up there and competing in finals is a testament to the coaches, players, and the program we have.”

These games were a great experience for our Vampire teams and coaches, and there are still more CEESA events coming up, which means that you can also participate.

“It is so important that students participate in sports and activities outside the classroom, and have those experiences of competing or travelling to festivals,” Hughes says. “Some of my fondest memories as a teenager were representing my school or club and performing in the local brass band. These experiences helped me to forge friendships that I still hold so dear today!”

For more information on the CEESA tournaments, please visit this link: https://www.ceesa.org/.

The CEESA Robotics Competition: Why AISB Isn't Heading to Detroit

New DP Science Courses: Everything You Need to Know